We look ahead to the Nations Cup which begins next week with USA, Canada, South Africa and England taking part. 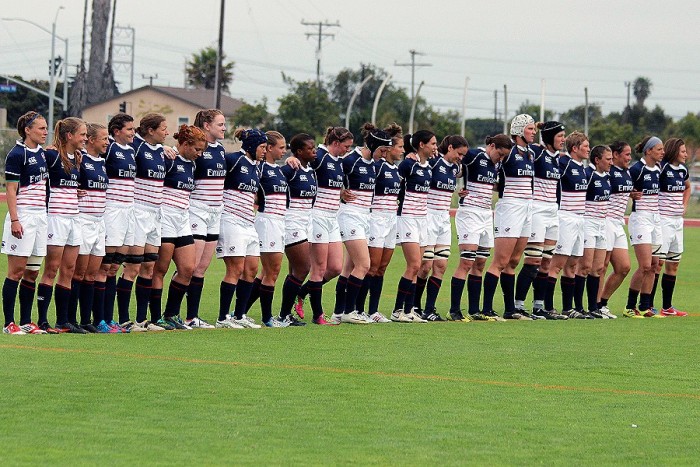 Fifth at the last three World Cups (and currently fifth in the latest ScrumQueens Rankings) the USA are determined to get back into the top four of world rugby – indeed their expressed target is to get to the final in 2014. As a result – and unlike Canada and South Africa – they have kept their test team playing throughout the lead-up to the Sevens World Cup, with a European tour in 2012 followed by playing host to France last month. The six tests have brought two wins, and four defeats – but all games were close, despite several leading players being absent.

The Nations Cup will reveal how valuable this policy has been. Lessons will have been learnt and, despite the losses, confidence should be high. This should have allowed the USA to steal a march on their great rivals – Canada – who they beat in the fifth-place game in 2010, and who they must now be ahead of if they are to have any chance of achieving their ambitions next year.

On home soil, with recent test experience not available to two of their opponents, and with a number of their Sevens players returning, the United States should make the final of this tournament. Whether they can also defeat England is another matter, but if they are to achieve their ambition of returning to the top of the game then they will have to at least push them close.

Currently ranked only 12th, as usual in this tournament South Africa play the part of the Great Unknown as they have played no test rugby since the last Nations Cup in 2011. However in that tournament they shocked USA with a 26-23 win – much as they did in the 2009 tournament (where they surprised everyone with a 17-17 draw with France), and the World Cup (when they beat Wales).

In short - lower ranked though they may be compared to the other teams - South Africa are a dangerous team with almost a tradition of springing at least one surprise result on a one more-fancied team in every tournament they play. This is partly due to fact that, being the “weakest” opponent in a series of three games in a week, theirs is almost inevitably the game where opposition coaches rest key players.

Inexperienced though they may be as a whole, the South Africans possess some staggeringly talented individuals capable of turning a game with a moment of inspiration. All they need is the opportunity. Three top coaches have been caught out by them in the past three tournaments – it would be very brave to bet against them making it four from four.

This is a very new look side and England have taken a development outlook toward this year’s tournament. While there are plenty of experienced players in the squad, Sarah Hunter as captain being one, there are 11 uncapped players in the squad including a number of England U20s players recently involved in their age group Nations Cup, and the squad is being led not by head coach Gary Street, but by assistant coach Graham Smith.

Building strength in depth a year out from the World Cup is an important step for England, as they head to the US as defending Nations Cup champions, but this is a great opportunity for a raft of new faces to stick their hands up for a selection in a vital World Cup year.  How they will fare is a bit of a guess given the plethora of untested combinations but there’s a backbone of real experience in the squad, and enough to suggest they will be hard to beat.

It has been a disappointing few months for England results wise, at Sevens, 15s and U20s level, and a winning Nations Cup campaign would be a very good way to end the summer.

Women’s rugby in Canada is on something of a high following a finals appearance by the national Sevens team in Moscow and the success of its U20s side at the recent Nations Cup.

This is a debut tournament for new head coach Francois Ratier who has worked closely with John Tait to identify talent throughout the country over the past year. This Nations Cup kicks off a big year for Canada in the lead up to the World Cup as they are heading to Europe in November for a three test series and then to New Zealand next summer to play another series before heading to Paris.

With that ahead of them, this Nations Cup offers a good opportunity for Ratier to experiment a little as his stated aim is to see 50 players in action over the coming year.

Six of the squad were part of the Rugby World Cup Sevens in Moscow so there is certainly plenty of optimism in their ranks.

All Nations Cup matches will be live-streamed, as well. The first six matches from University of Northern Colorado will be available on USA Rugby TV, with the Infinity Park at Glendale website hosting the feed for both matches on Finals Day.