Nervy France back to winning ways 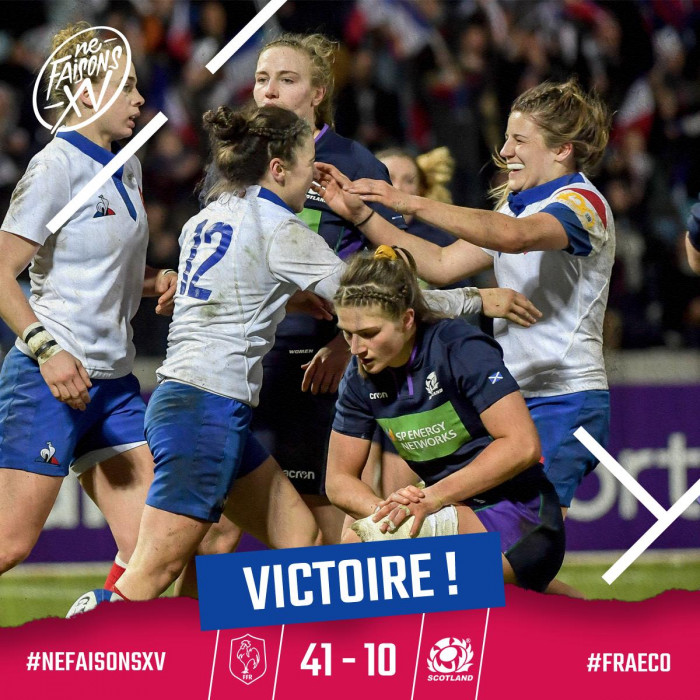 A nervy and anxious France took a while to settle I the first half, the pain and tension from the defeat to England in the last round being evident from the start when their kick-off failed to go 10m.

Even so, France were still massively dominant up front, the Scots scrum unable to offer any resistance. Just five minutes in the first Scots scrum was driven backwards at a rapid rate, the resulting penalty then put France on the Scots 5m line and - despite some heroic defence – the furst French score came from Gabrielle Vernier finding space out on the right.

Ten minutes later a second French try came from a French scrum, the Scots being held, Menager breaking away, flicking out to Bourdon and 10-0.

But France still were not settled, and Scotland were managing to disrupt what they were trying to do. Some clever play took the Scots to the French 5m line and after a long period of pressure Rhona Lloyd found space to dive over. With 12 minutes to go Scotland were back in the game, 10-5

But France finished the half strongly with two well-taken tries. A well timed kick over the top by Emma Coudert put Vernier in for her second try, and then right on halftime Doriane Constanty saw a gap and exploded away for the bonus point try, giving France a 24-5 lead at the break.

France started slowly in the second half, and it took them 13 minutes to add to their score – a perfectly weighted kick by Coudert again finding Vernier for her third try. 31-5.

Three minutes later Boujard – who had just come on for Constanty – picked up a Scottish kick deep in her own half and ran forward to start a great passage of play down the Scots right wing, Boujard herself being on the end of the final pass. 36-5.

Which is how the game ended. A good win for France, but not nearly as comfortable as expected, while Scotland will have come away with some positives.