New Zealand took out the title in Toulouse in the final round of this season's World Sevens Series. 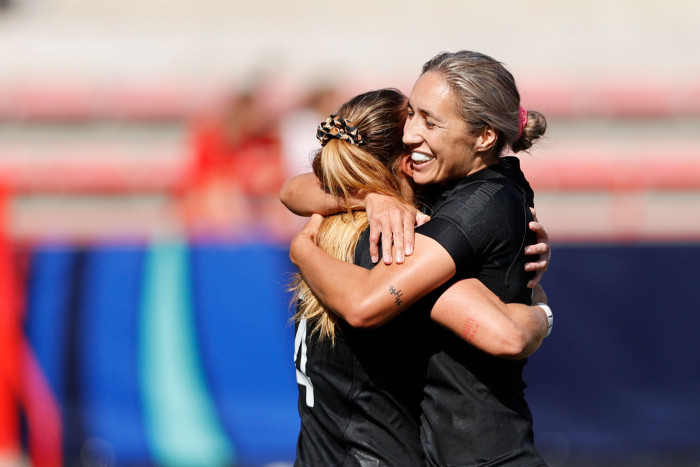 The best four performances in this year’s World Series counted towards the final result, so with four victories already from the opening five rounds Australia already knew they were the women’s Series champions but there was still plenty to play for in Toulouse.

On Day One Australia showed no signs of taking the foot off the gas as they opened their Toulouse account with a 50-0 win over invitational side South Africa, with standout star Charlotte Caslick running in a hat-trick of tries.

An intriguing clash between Olympic bronze medallists Fiji and Malaga champions USA went the way of the Fijiana, who raced into a 26-0 lead within eight minutes before two late tries made the final score 26-12.

That set up a direct clash between the Aussies and Fiji for top spot in the pool, and Tim Walsh’s Australian side showed their champion quality by fighting back from 14-12 down at half-time to win 31-21.

USA’s 22-0 win over South Africa still left them in contention for a top-two finish on day two, with the Americans level on four points with Fiji, two behind pool-toppers Australia.

In Pool B New Zealand began with a 45-0 rout of invitational side Scotland in their opening game. Michaela Blyde, Niall Williams and Stacey Fluhler all bagged braces in that game, and Blyde repeated the feat by crossing the whitewash twice in a 29-0 win over Spain to consolidate the Black Ferns’ grip on top spot.

But Canada remained in the running to win Pool B after Day 1 after beating Spain 26-12 in their opener before edging past a determined Scotland side with a 14-7 win.

In Pool C Langford bronze medallists Ireland got off to a flying start by beating England 31-12, largely thanks to Lucy Mulhall’s hat-trick – although the unstoppable Amee-Leigh Murphy Crowe also got in on the try-scoring action.

They were then given a tough challenge against a Brazil team needing ranking points to try and avoid relegation, requiring a last-minute try from Murphy Crowe to snatch a 17-14 win and deny the Brazilians their first victory in the fixture for five years.

Olympic silver medallists France were roared to victory by the home crowd in their opener against Brazil, with Joanna Grisez bagging two tries in two first-half minutes to help the hosts on their way to a 24-7 victory.

Grisez was at it again later in the day as she crossed the whitewash twice in a 33-7 win over England, with Lou Noel also bagging a double in a ‘Le Crunch’ win that delighted the evening Toulouse crowd and set up a pool decider against the Irish.

Day two would see the final round of pool games and the quarter-finals.

The conclusion of the pool stage also threw up an upset, as relegation-battling Brazil earned a resounding 31-7 win over England that was also good enough for them to reach their first quarter-final since 2016. Even better the win was big enough to ensure that their relegation rivals Spain failed to reach the last eight despite beating Scotland in their final fixture.

As a result, Spain could not improve their series points score and would finish on 26. If Brazil could finish better than 8th overall they could pip the Spanish in the relegation battle.

Onto the quarter-finals where New Zealand began with 41-0 victory over Brazil. Michaela Blyde’s superb form in Toulouse continued as she ran in two early tries to take her weekend total to six, before Risi Pouri-Lane stretched the Black Ferns Sevens’ lead further with a third score. Serial try scorer Portia Woodman put on her latest finishing masterclass with a second half hat-trick, Shiray Kaka adding the other score, as New Zealand progressed to the last four without conceding a point.

Australia joined them there thanks to a 24-14 win over USA in their second consecutive meeting on Saturday. Maddison Levi scored her sixth try of the weekend to hit back after a fast start from the USA, and Lily Dick showed a sharp turn of pace to put the game out of the Americans’ reach with one minute left on the clock.

Ireland edged Canada by a point in a rollercoaster 22-21 win over Canada where the lead constantly changed hands. The Canadians went in 14-12 up at the break courtesy of one more conversion after the sides scored two tries apiece. Erin King ran in her second try of the game aearly in the second half to put Ireland in front, but Olivia De Couvreur hit back to restore Canada’s lead. However, Eve Higgins backed herself late in the game and had the pace to beat everyone down the right wing and touch down what turned out to be the decisive score.

Home advantage wasn’t enough to push France into the semi-finals, as they came undone against a free-flowing Fiji side. Les Bleues hadn’t conceded more than one try in any of their games in Toulouse, but Fijiana crossed the line three times before half time to accumulate what proved to be an unassailable lead. Rasa Nagasau added a fourth Fiji try early in the second half, but France finished with a flourish thanks to scores from Joanna Grisez and Ian Jason.

Onto the final day which began with the crucial relegation tussle as Brazil took on France having to win to avoid the drop. Grisez opened the scoring for France in the first minute, but Luiza Campos levelled the tie two minutes later. However after that France ran away with the game with five more tries, winning 36-7. Spain were safe. Canada ensured they would meet France for 5th place with a 19-7 win against the USA, a result that meant the USA would finish outside the top 4 in the series.

Onto the business end of the tournament, New Zealand were always in control against Fiji thanks to two a brace of early tries from Blyde. Despite the Fijiana snapping at their heels the Ferns reached the final 24-14. The second semi-final was even more decisive as Australia dismissed Ireland by 40-7.

Onto the final, and the Ferns defeated 2022 overall series champions Australia 21-14 in a thrilling final in which veterans Sarah Hirini and Kelly Brazier were outstanding.

The two had also played in the final in the last round in Langford, and this time New Zealand looked the sharper team. Demi Hayes scored an early try and Dominique du Toit converted to make it 7-0 to Australia before Risi Pouri-Lane bagged a seven pointer for New Zealand to level things up.

Soon after half-time the score was level at 14-14 as Alena Saili finished well and Pouri-Lane added the conversion. And then came Kelly Brazier’s try, converted by Pouri-Lane, with two minutes to go to give New Zealand a hard fought 21-14 triumph.

In the other games, all round brillance from Alowesi Nakoci saw Fiji take third, after they beat Ireland in the bronze medal match.

Vicki Elmes Kinlan and Stacey Flood scored unconverted tries for Ireland who have been the team on the rise this season.

France, the hosts, finished fifth when tries from Jade Ulutule, Yolaine Yengo and Joanna Grisez - added to by two conversions by Ulutule – helped them win the fifth place play-off.

They saw off Canada 19-14 in a close tie, the losers tries coming from Krissy Scurfield and Ella O'Regan.

Spain finished 11th after they battled back from 14-12 down at half-time to defeat England in the 11th place play-off. María García and Iera Echebarria scored tries for Spain in the first period, with one converted by Lea Ducher, but Ellie Boatman and Isla Norman-Bell tries, both converted by the latter, had England two points up after seven minutes. The second half belonged to Spain and Ducher and Amalia Argudo scored tries and two of them were converted as they came out on top 26-14.

Despite some spirited performances, including an outstanding victory over England on Saturday, Brazil finished the Series in the relegation position as the 11th core team.

Next year's World Series is likely to act as a qualifier for the 2024 Olympics in Paris. If results next year were the same as this the likely Olympic qualifiers would be...