You can take nothing for granted – that is the main message from the opening round of the World Series after it returned. That – and Australia look awesome! 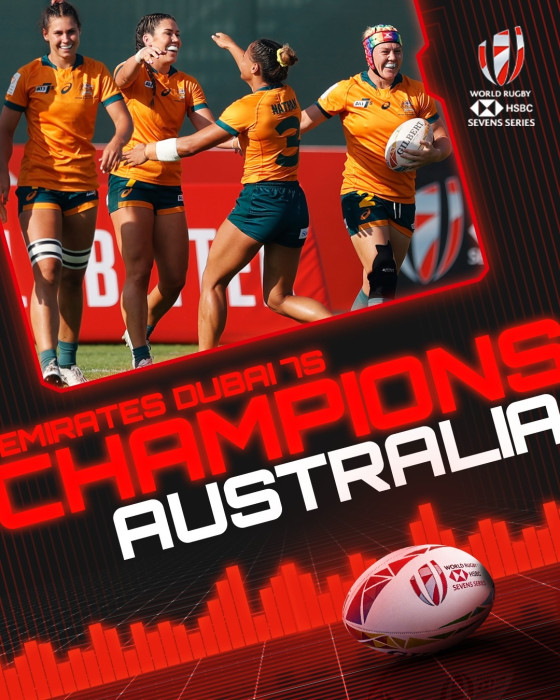 663 days after the last round of the World Series closed in Sydney in early 2020 sevens was back this weekend in Dubai.

No New Zealand (due to COVID) and no England (due to a contract with World Rugby to allow Great Britain to play in their place in 2021),  but every other core team was present with many familiar names but also many new looking squads.

The final rankings will be based the best four tournament results from the six currently planned, a policy that resulted in some teams being particularly experimental. Canada in particular selected three teenagers in a squad with an average age of just 23.

The opening rounds did not suggest the “surprise” results that were to come. Australia and France in Pool A, and Great Britain and Fiji in Pool B, won their opening games. However it was not all quite plain sailing, with Britain coming from behind to beat Russia and Fiji only beating the young Canadians from the final play. The biggest surprise, however, was Olympic silver medallists France just sneaking home against Brazil.

Brazil had only ever beaten France once – back in 2013 when France were new to the World Series – but lead France three time in a hugely exciting game, with only Jade Ulutule’s last play try winning it for France.

Unsurprisingly after that game, Brazil beat Spain in the next round – but France then lost to the USA, who had been well beaten by Australia in their first game. Canada ended their opening day with a first win against Ireland before Russia made up for their narrow first round defeat to Britain with an impressive win against Fiji.

Day one ended with just Australia and Great Britain unbeaten and apparently heading for the final, with USA and Fiji likely to be playing for bronze. That continued to be the likely outcome from the fourth round of games, but the fifth round did not go to script.

First the USA took on Brazil, a team they had beaten 17 times in 17 previous meetings. But not today. Despite a disappointing Olympics, this is a different looking Brazilian team and they lead 7-0 at half-time. Tries from Alex Kelter and Ilona Maher looked to have rescued the Americans, but there was time for one more play and after a long period of pressure Thalia Costa crossed the line for a 12-10 win for Brazil,  pushing USA into the 7th place playoff, while Brazil would play for 5th – a remarkable finish for a team who, in eight previous years of World Sevens, had never finished higher than 8th.

Next up the “unbeatable” Australians shared eight tries with France in a thrilling game, coming out ahead 24-22 when the French were unable to convert they final try. However, with USA losing to Fiji France were now in the bronze medal match.

After that we had the replay of the Olympic bronze medal game with Fiji taking on Great Britain. Could Britain gain revenge – and a place in the final? No was the answer as Fiji dominated proceedings, winning 28-5 and also, as a result, winning the pool while the defeat was large enough to push Britain into the fifth place playoff.

In the playoffs Ireland ended a disappointing weekend for Spain with a 31-14 win – but with the performances of Brazil both will be looking over their shoulders with relegation back this season. USA then comfortably beat Canada for 7th, despite an early Canadian try.

Then came another classic game as Brazil took on Great Britain, the lead changing six times – and Brazil looking like they had won right at the end. But there was just time for a restart and Grace Crompton won it for Britain 22-21.

France overwhelmed Russia 40-0 for third, before Australia beat Fiji 22-7 in the final, Fiji battling away but unable to find a way though until a consolation try right at the end, Charlotte Caslick picking up the Player of the Final award.