No festive let-up for international players 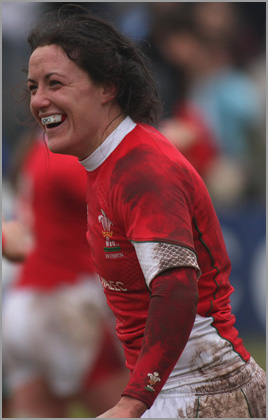 Our squad sessions are now over for 2010 with the last one being the weekend past. We said ourgoodbyes for all of 13 days, before we start the year as we mean to go on with fitness testing on the 2nd of January. Now, some people might feel aggrieved at having to do this, however, considering last year we met up on the 1st of January, we are actually very excited!

For many, the Christmas break is a time to relax, chill and overindulge. For us rugby types, it gives us the chance to experience what it must be like to be a professional athlete! No early mornings to get to work, or late evenings having gone straight to the gym from a meeting which has overrun. No, over Christmas, we can forget about the routine of trying to fit everything in around our normal lives, AND, we even get a chance to train during daylight hours! Exciting time.

Going totally off the pointHave you ever attempted a speed session on snow!!??

And Im not just talking about a little sprinkling of the white stuffWe get a whole lot of snow in Scotland where I live.

My training partner Lucy Scottish Millard and I thought it would be a great idea. At times, Bambi on Ice sprung to mind, however, we did think of an ingenious method to work on our agility and footwork. This comprised of running through a designated area dodging snowballs which were being pelted by the other person. This was fine until some small children thought this seemed a fun game and proceeded to join in! Naturally, being the competitive type, we finished the session with a mass snowball fight (I was outnumbered by Scots and didnt fare too well).

So, I know what youre thinking, maybe Christmas day is a day of rest?

Actually I love training on Christmas day. Getting up nice and early, pulling on numerous layers, not forgetting the Ipod, and running beside the sea. You just can't beat it. I love how frosty and quiet it is, with barely another soul around. There is something quite tranquil about it, just me, my tunes, and my thoughts. It is an opportunity for me to reflect on the year gone by- the highs and the lows, and it also allows me to turn my attention to what lies ahead in the New Year: The 6 Nations, and naturally, the World Cup.

Now, if I was Catrin, our prop, I can only imagine what she would be thinking. She recently let slip her plans to chip and chase in her next international (Im still not sure she even know what this means!). Shell no doubt be imagining herself delicately kicking over, regathering, side-stepping all 15 opposing players and producing an Olympic standard cartwheel as she scores between the posts. And, just to make it a challenge, shell kick the conversion with her left foot!

By the time I come home from my Christmas run, Ill walk into the smell of turkey, the sound of Christmas carols, and my mum pottering around in her Rudolph-antler-jingling headband. Soon, itll be time for her to wake up the rest of the house (and the neighbours) by singing and ringing the bell, shouting Santas been, Santas been.

And with that (for a couple of hours at least) the thoughts of rugby are put to one side and attention turns to what Christmas is all about; eating lots of turkey, watching Christmas classics on TV, playing games, and most importantly, sharing all of this with the people you care about the most.