Nomads out to keep winning 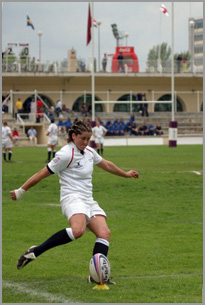 The Nomads are looking to keep their winning streak going this Sunday as they take on England A at Esher. The Nomads are an invitational team featuring top players not currently involved in international competition as well as ex-international team players from around the world. They havent lost a game since 2007.

The Nomads squad for the weekend features a wealth of experienced players with the likes of former England players Shelley Rae (pictured), Karen Andrew Sue Day and Susie Appleby included. There are also capped players from countries including Canada, Wales and Ireland.

Barnett said: "This is a big season for all of the players. This is their opportunity to put their hands up for a place in the world cup squad which is less than seven months away. 'A' team rugby is all about development, and yes we want to win every game we play, but really this is all about staking their claim.

"The Nomads traditionally always provide a difficult challenge and they are always unpredictable, but that is great for our players. You never know what you are going to get and with so many former international players in their ranks they are always a difficult proposition."

England A will also play Spain and France A this season, as well as a second test against the Nomads.

England A team to play the Nomads.