Canterbury successfully defended their Farah Palmer Cup Premiership title while beating Counties Manukau 52-29 in Christchurch on Saturday while in the Championship Wellington proved far too strong and beat Otago 57-5 at Jerry Collins Stadium at Porirua Park. 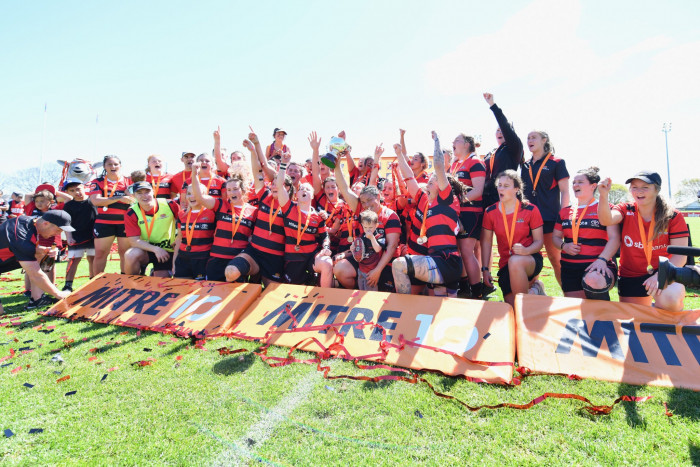 Counties Manukau, who were beaten 7-13 in last year's final, made a bright start to the game, scoring from a powerful lineout drive 90 seconds after the start with Te Kura Aerengamate getting the try.

However, Canterbury struck back quickly with second five-eighths Lucy Anderson breaking the defensive line and working back infield to find halfback Kendra Cocksedge in support to score and convert to give Canterbury the lead it never gave up in the rest of the game.

Counties Manukau made a fatal mistake when penalised just out from Canterbury's 22m line. They took their eye off the ball and Cocksedge took the tap, evaded those defenders who had time to try to halt her and scored after a 70m break.

They did respond when using their scrum power to effect before releasing the ball for Leilani Perese to cross for the try.

Another Anderson break, this time off a lineout saw the ball taken to the Counties Manukau line and from the ruck a long pass from Cocksedge found No.3 who passed the ball on for centre Greer O'Rourke to score by the posts.

Cocksedge continued to make play in a positive sense. Her kick into the box was fielded by Alannah Bremner and she slipped the ball to wing Sam Curtis who was in support to run in the try, followed soon after with a second when a failed Counties Manukau clearing kick bounced in her favour within no one with cooee on her side of the field.

The second half wasn't any better for the visitors when they were trapped trying to play the ball in their own 22m area and when ball was turned over it was centre Grace Brooker who was untroubled to get over for the try.

Anderson completed the scoring for Canterbury when Brooker set up a ruck and with quick clearance Anderson cut through to score.

Ushering on their substitutes Counties Manukau dominated the latter stages, finishing with the three last tries of the game. Left wing Lavinia Tauhalaliku scored the first while prop Anastasia Mamea burst over from a goalline maul twice in the dying stages for tries.

In the second game, Otago made a fast start scoring the opening try after good lead-up work by the forwards. The ball was moved through the backline for left wing Kiana Wereta to score after seven minutes.

But that was to be it for the visitors at Porirua Park as the bigger Wellington pack created chances which the home backs were not slow to put to advantage.

Wellington's win lifted them back to the Premiership for next season.