New Zealand claimed a fourth World Series successive after beating the hosts in the final in Glendale, Colorado, on Sunday 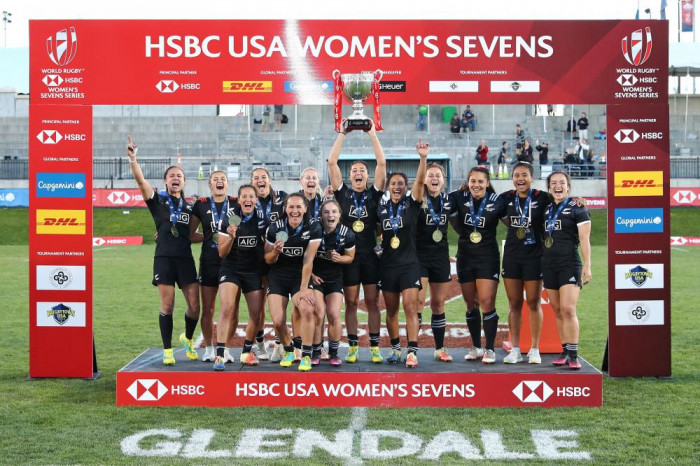 New Zealand have now won 33 consecutive matches, including the Commonwealth Games and Rugby World Cup Sevens, after another dominant weekend.

USA were bidding to win a first series title in their fifth Cup final and opened the scoring through captain Nicole Heavirland, but New Zealand's response was swift with Portia Woodman leaving Naya Tapper in her wake to run tie the scores at 7-7.

Woodman ran in a second try in the sixth minute, having too much pace for Cheta Emba to catch her, although the American was close enough to force the Black Ferns Sevens star to dot down out wide, not that it made a difference with Tyla Nathan-Wong landing the conversion.

A quick burst of speed then put captain Sarah Goss through a gap to give New Zealand a 21-7 lead at half-time. That advantage grew when Ruby Tui, who was later named HSBC Player of the Final, straightened an attack and offloaded to Niall Williams. She was initially brought down short of the line by Alev Kelter, but quickly released the ball and dived over the line.

It was left to Woodman to put the icing on the victory by completing her hat-trick, taking her tally for the tournament to 10 and bringing her to 195 tries in series history.

After the first day, Australia, Canada and New Zealand finished top of their pools which, while predictable, was not without its drama.

Champions Australia in particular had to come back from 15-0 down at half-time in their final pool games to beat Russia 21-15 after two tries in the first three minutes by Kristina Seredina and a third from Baizat Khamidova just before half-time looked to have set up a surprise. Ellia Green had other ideas running in two early second half tries, and when Anastasia Prokudina was yellow-carded Dom du Toit grabbed the winning try.

New Zealand in Pool B won their last three games had fewer problems, seeing off England 28-7 and the United States 35-12, though the States had much the better of the second period, their two tries being crucial for their quarter-final survival.

The United States had narrowly lost to England in their opening game with England achieving an encouraging start to the series. Ellie Kildunne was the star of the game shrugging off two tackles to score the winning try at the death after some prolonged pressure in the USA 22. The hosts had looked like holding on for a narrow victory after tries by Ilona Maher and Naya Tapper, but England silenced the crowd by sealing the 12-10 win and the hosts had to hope for a best third spot.

With only a win against China, the hosts hope of a quarter-final was dependent on getting one of the two best third spots. But when Ireland blew away Fiji by an astonishing 59-7 – by a margin their best ever series win (and one of the biggest ever series wins) they wrapped up the first of these spots, leaving the States up against Spain for the second.

Spain played after the USA, and knew they had to win by 48 points against Mexico (who had lready suffered two 50-point defeats) to steal that final place. They were 24-0 ahead at half-time, but in the second half Mexico held on, passes failed to go to hand, and the game entered the last minute with Spain only 34-0 up. That became 39-0 with 30 seconds to go – but attempting to take a quick conversion ensured resulted in it being missed. Another try was added, but the buzzer ensured time was up, and by winning 46-0 Spain had missed out by a single point.

Newcomers China had a tough start with a 45-0 loss to New Zealand, but recovered well and lead against the USA in the second game before second-half tries from Ilona Maher (2) and Alev Kelter to meat that the hosts just took the game 24-21. China also lead against England – twice – in the first half, but again they could not hold onto their advantage and England ran away with the game in the second half to win 35-12.

Finally, a new-look Fiji started brightly against Canada in their opening match before losing 25-12, but rapidly seemed to run out of steam, losing their next match 45-12 before their massive loss to Ireland.

One the second day, New Zealand were simply too strong for Ireland in the first quarter-final but the second game between Canada and Russia was far closer, Alena Mikhaltsova setting up one try and scoring the next to briefly put Russia 10-7, but Ghislaine Landry and Charity Williams gave the advantage back to Canada.

But the game was far from over. Arina Bystrova pulled a try back for Russia, bringing them to within four points of Canada, and Russia regained the ball for the final play – but a great tackle by Kaili Lukan achieved a turnover, and Canada had won.

Quarter-final three was another great game, Killdunne again giving England a 7-5 lead in response to a first minute try from Montserrat Amedee. Marjorie Mayans returned the lead to France, the match being perfectly balanced at the break. But the second half was all France and two more tries and then magnificent defence ensuring a French win.

And so to the final quarter-final.

With the backing of the home crowd, the USA shocked Australia and raced into a 19-0 lead. Australia had recovered against Russia the previous day, but the USA proved to be a different matter. Emma Sykes pulled a try back, but Ilona Maher completed a hat-trick for the USA to put them into the last four 26-5.

The first semi-final continued the excitement - Canada matching the Ferns try for try, a Portia Woodman brace being matched by scores from Bianca Farella and Julia Greenshields in the first half. Shakira Baker put the Ferns ahead again 21-14, but a 90m break by Brittany Benn pulled Canada back – but crucially the speed of Nathan-Wong forced Benn into the corner, and the conversion was missed. Sarah Goss then added a fourth Ferns try, and they were into the final 28-19.

The second semi-final began with France pressurising the USA line, but after Ciofani was tackled into touch inches from the line, USA turned over and Cheta Emba was given just enough room to break away, her speed leaving the French far behind. But French pressure continued and right on half-time Amedee finally pulled the French level, touching down by the posts. 7-7 at the break.

The second half saw the American speed again on show, this time Alex Kelter seizing the chance to leave the French behind, but Julie Annery found just enough room to squeeze over and with two minutes left it was all square at 14-14. Jessy Tremouliere scored in the corner to give France the lead, but there was just enough time for a restart. The USA kept possession, and after some work, it was Alena Olsen who broke through on the right to level the score – and Alev Keter whose kick put USA into the final.