Representatives of the New Zealand Maori Party have called on the NZRU to financially support the Aotearoa Maori Women’s Rugby 7s team whoare planninng to take  part in the Roma 7s in June. 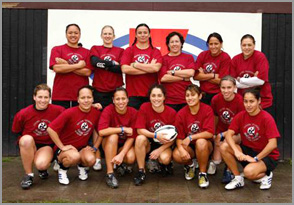 The Maori Womens 7s side (pictured at the Amsterdam 7s last year) compete regularly on the international circuit and reached the semi-finals of the Hong Kong 7s recently.

"The union really needs to look at how it not only treats Maori but women," Maori Party sports spokesperson Te Ururoa Flavell said.

"Every other rugby-crazed country in the world praise this squad's excellence in the sport but unfortunately that doesn't appear to be getting through to the union.

"By not supporting this team the union has forced them to become beggars and borrowers and that is no way to be treating a side that is developing and nurturing the skills of emerging players so they can represent this country at the 2016 Olympics."

Peter Joseph, head coach of the team said: We have selected a very talented young team with a great mix of experience and emerging talent,

It is very exciting to see talented young players like Fielding high school student, 17 year old Sarah Goss, earning selection to this wonderful Aotearoa Maori team and having the opportunity to shine on the international stage, said Peter Joseph.

Other womens 7s sides competing in Rome include the national teams of France, Italy and Spain.