NZ too strong for Australia in Perth 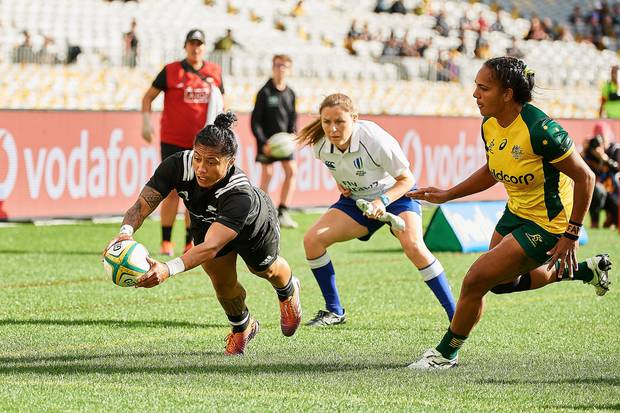 It was a historic first match for the Wallaroos in the west of the country and the scene was set for a high quality match in excellent conditions.

The Black Ferns put on a show for the crowd in the first half with their clinical finishing and power play, while the second half saw the hosts give a much better account of themselves and show the strides they have been making in recent months.

Having lost their most recent game to France in the summer's Super Series, New Zealand wasted no time in tearing into this one striking early with number 8 Charmaine McMenamin crossing for the opening try from a 9th minute maul.

That lead was extended five minutes later when winger Renee Wickliffe capitalised on a pinpoint cut-out ball to score in the corner, before McMenamin registered her double.

After a tightly contested back and forth contest between the two sides for the opening 30 minutes, flyhalf Ruahei Demant’s late surging run through the middle to score next to the posts opened up a 22-0 lead for the New Zealanders at the half.

In that first half alone the Wallaroos missed 28 tackles to the Black Ferns' one, and it felt like the second half could have been a long one for the hosts so it is to their credit that they were much improved when they came out after the break.

Alysia Lefau-Fakaosilea forced a turnover deep in her own half to allow Lori ramer to swoop on the loose ball and charge 75 metres downfield to the try line.

New Zealand quickly answered through fullback Selica Winiata and then a Kendra Cocksedge penalty saw the visitors pull away to a 30-5 lead at the midpoint of the second half.

Desperately looking for a spark, it was Cramer who crossed again following an offload from Lefau-Fakaosilea close to the line to enable the home side to pull back to a 20-point deficit.

New Zealand would hit back again though, with Captain Les Elder stepping up for her side before Ayesha Leti-I'iga and Joanah Ngan-Woo followed her lead in a flurry of tries to close out the contest.

The two teams will meet again next week in the second instalment of the International double- header to be played at Eden Park, Auckland.