New Zealand and Canada beat USA and France in round two of the Women’s Rugby Super Series in San Diego. 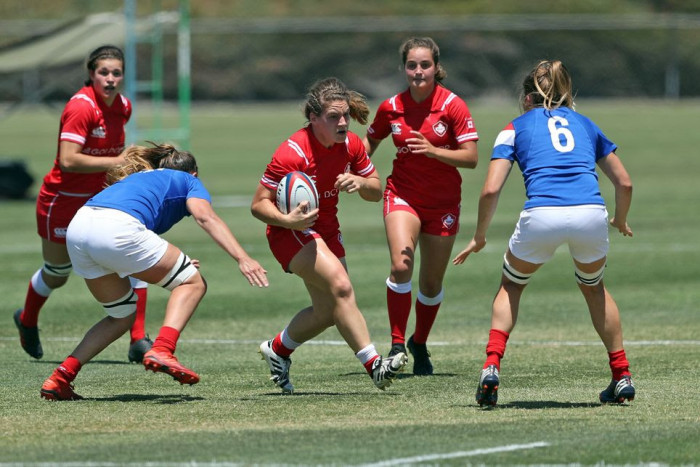 ​The Black Ferns were too powerful for hosts USA as they scored five tries to win 33-0  while Canada beat a lacklustre looking France 36-19.

Next up for the Canadians this Saturday is a meeting with England, who had a bye on Tuesday, while France will have to regroup before taking on the in-form Black Ferns.

New Zealand not at their best but still too good

The world champions came out firing, scoring two tries within the first 10 minutes, and the Black Ferns were strong up front with lock Eloise Blackwell –named player of the match – and Te Kura Ngata-Aerengamate particularly dangerous.

It was an easy first score with Kendra Cocksedge creating space and passing to fRuahei Demant who could have gone over herself, but passed to centre Carla Hohepa for an easy finish.

Te Kura Ngata-Aerengamate went over for the second try after some brilliant pick and go in the forwards again. The NZ rolling maul was very solid with the US struggling to contain it far too often.

Natahlia Moors scored after a tap and go of Cocksedge and NZ led 19-0 just 20 minutes in.

Still up 19-0 at halftime, the Black Ferns attacked through the lineout again in the first moments of the second half with an eight-phase assault providing the chance for Tapsell to drive over.

The Introduction of substitutes saw both sides take time to settle again but none more of an impact than Theresa Fitzpatrick who at her first touch took a gap and raced 40m downfield. It set up more opportunities for New Zealand but the USA defended well and then attempted to make some strong runs from deep in their own territory.

They were unable to get hard-running fullback Bui Baravilala into the action often enough as she proved a handful whenever she had the chance to wind up her sprint.

However, the Americans were consistently undone by poor handling and lineout throwing woes which made applying pressure much easier for New Zealand.

Cocksedge and Demant kept the ball in front of the pack and then in the 62nd minute the Black Ferns unleashed a ferocious lineout drive with the backs joining in and Blackwell over for the fifth try.​

Canada opened their second game with a penalty kick from Sophie De Goede, in just her second game for her ocuntry.  After a French try, Canada answered back with score by Tyson Beukeboom. A series of penalties against France gave Canada possession late in the half. Janna Slevinsky added another try for Canada, smashing through the defensive line to score. De Goede added on two conversions to put Canada up 17-12 at the break.

Starting off the second half, Canada moved the ball through hands to find Sabrina Poulin on the wing for the try. ­Canada’s forward pack kept the pressure on with a series of pick-and-goes inside France’s five metre line. Laura Russell crashed over the line to score and widen Canada’s lead. Veteran Amanda Thornborough notched the final try of the game—securing the win.

De Goede’s two second half conversions brought her to 11 points total in the match.