In surely the best Women’s Rugby World Cup Final ever, a pulsating game ended in triumph for the Black Ferns in a game that lived up to all its expectations. 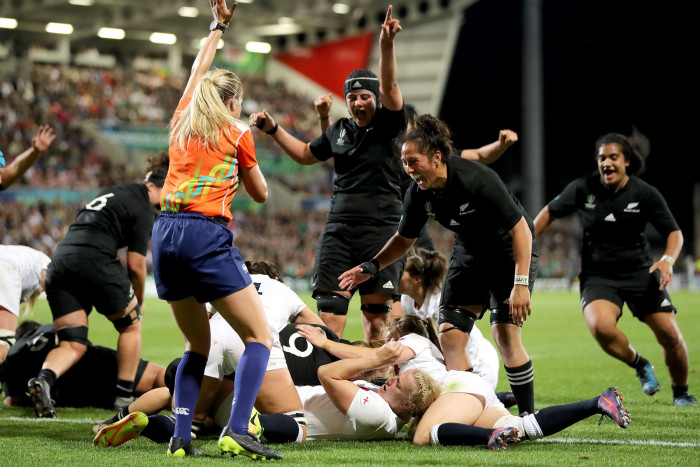 This was an extraordinary game, with the Black Ferns trailing 12 points just a few minutes away from halftime, but a vital try just before the turnaround got them back into it, and from there it was one way traffic, particularly once Simon Middleton decided to make a raft of early changes in the second half.

The departure of Sarah Bern, Marlie Packer and Mo Hunt before the hour mark seemed baffling, and from there on in, England were struggling, though this was particularly so because New Zealand looked a different side after the break, tearing into England's strengths up front.

The opening ten minutes of this clash were played at a frantic pace.

Sarah Bern and Toku Natua both had eye catching runs and England almost scored after 5 minutes, but the flick pass from Emily Scarratt didn't work out and New Zealand could breathe again.

It was Selica Winiata who broke the exciting deadlock when a fine kick from Victoria Subritzky-Nafatali headed her way, and with the bounce falling unkindly for the covering Emily Scarratt, Winiata broke away to finish and take the early lead.

Scarratt had taken a knock in the move, but was soon to her feet and making impacts all over the park and it was her penalty kick on the 15 minute mark which registered England's first score.

As England started to dominate up front, a harsh yellow card for Sarah Goss handed them even more momentum and when Katy Mclean kicked for the corner, it set up a great passage of drives from a confident England pack.

Alex Matthews drove over but was held up but there was no such luck for the Ferns at the next scrum, as Joy Neville awarded an early penalty try with England marching forward.

It was all England now and Rachael Burford’s lovely break through the middle set up Lydia Thompson for a try she couldn't fail to finish. Scarratt’s touchline conversion was typical of a player who thrives on the big occasions, and at 17-5, New Zealand were already staring down a barrel.

They needed something, and they got it just before the break.

The brilliant running prop Natua got on the end of the ball after patient charges, well organised by Kendra Cocksedge, and despite being on the back foot for most of the first half, New Zealand turned round just seven down.

The Ferns started the second half strongly with Aldora Ituni, Natua and Fiao'o Faamausili carrying hard in the tight exchanges.

It was Natua again who profited when a series of crashes close to the England line saw the prop dive over and finish, with Subritzky-Nafatali vital in the leadup.

Scarratt’s penalty restored England’s lead before a brilliant break from Stacey Waaka put England under huge pressure back in their 22. With Aroha Savage carrying through the middle, Charmaine Smith did brilliantly to touch the ball off the bottom of the post and score the try.

It was hard to keep up at this point as momentum swung both ways and when Subritzky-Nafatali kicked loosely, Thompson showed a clean pair of heels to break down the wing and score again and put England back in front.

But seconds later, New Zealand were back ahead with the unstoppable Natua barrelling over once again.

England’s coaching team made a raft of substitutions at this point as the momentum started to shift New Zealand’s way. The entire front row was replaced, and after that Marlie Packer and Mo Hunt were taken off. It was a surprise and it seemed to lift New Zealand.

Portia Woodman found herself on the ball for a rare occasion in the game. and her break led to some space for Cocksedge who snuck over around the fringes to push New Zealand 11 points ahead.

When Winiata grabbed her second, thanks to a Subritzky-Nafatali kick, it was game up and Izzy Noel-Smith's late try was only a consolation for England.