The Oceania Championship have been overshawdowed by the effect of a South Pacific measles outbreak that has cost Tonga a chance to compete and disrupted the tournament. However, the rugby has restarted with a second round that saw a huge win for the Black Ferns Development XV, and Fiji doing likely enough against Samoa to see them to the final. 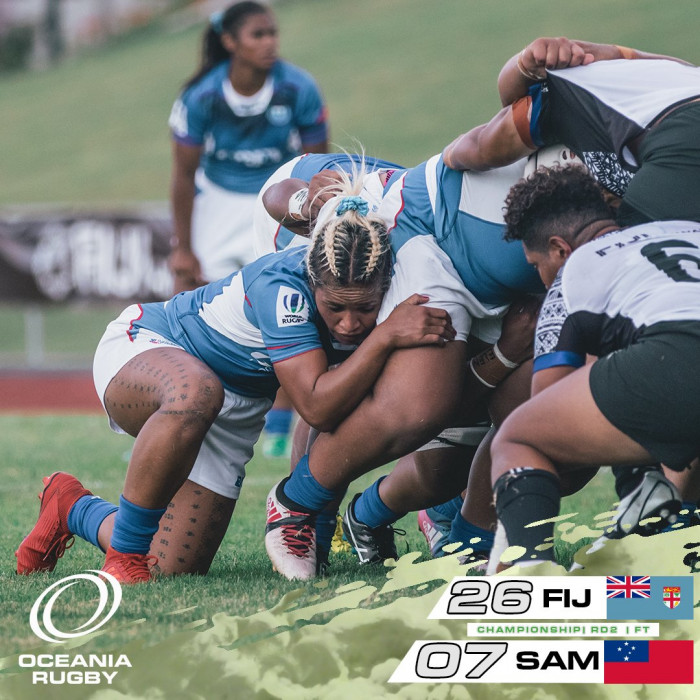 The growing tragedy of the South Pacific measles outbreak, which has already cost 20 lives in Samoa with growing numbers of cases in Tonga and New Zealand, has overshadowed the Oceania Championship and World Cup qualifier in Fiji.

Unfortunately one of the vectors for the disease spread has been the movement of sports teams, and especially rugby teams, with the arrival of the disease in Tonga being blamed on a rugby team carrying the pathogen to the island from New Zealand. So when players in the Tongan team in Fiji started to display symptoms the Fiji Ministry of Health, after consultation from the World Health Organisation (WHO),decided to to quarantine the Tonga team for a total period of 18 days (Sunday 17th November to Wednesday 4th of December) - a decision that ended the Tongan hopes of participating in the tournament.

Acting Head of Health Protection for the Fiji Ministry of Health and Medical Services Dr. Aalisha Sahukan said "the risk of infection through contact was deemed too high for the Tongan players to participate in the tournament. Based on the knowledge of the pattern of test results seen for measles cases amongst young adults in Tonga, we have advised the Tongan Women's team that they must be quarantined for the stated period. There is a risk that the teams they play against, and any other people they come into contact with during the infectious period of the disease, could be exposed and develop the disease. And those who potentially develop the disease could spread it to other people in Fiji, and overseas when the national teams return home."

Executive Member of Oceania Rugby Cathy Wong said that the health and safety of the team and the general public was the uttermost priority for everyone involved. "The decision to withdraw Tonga from the remaining rounds of the Oceania Rugby Women’s Championships in 2019 was a collaborative decision between all parties in the best interest of player welfare and public health,” she said. “Public safety and player welfare dictate all our decisions on any given day and today is one of those days.”

Meanwhile on the field play recommenced with a big win for the Black Ferns Development XV against their major rivals, Australia A, winning 50-0. The ferns scored eight unanswered tries and while Australia had their chances, they were unable to turn a mountain of possession in the final minutes into points.

Aussie captain Michaela Leonard was disappointed with the result. "Obviously we don't want to come out here and end up with a result like that," she said. "The girls came out and played hard, we just didn't stick to our structures and we made a few crucial errors and didn't react to them. That's something moving into next game that we're going to sharpen up, hopefully again Samoa and have a lot less errors there. But credit to New Zealand Development, they played well, they played skillfully and we were always expecting a tough game."

Black Ferns captain Arihiana Marino-Tauhinu said she was pleased with her team. "I'm really proud of the girls, the execution was really good and I'm just super-proud of the effort," she said. New Zealand is yet to concede a point in the competition after beating Fiji 53-0 in their tournament-opener on Monday.
The Kiwis dominated the opening half against Australia A, racing to a 26-0 lead at the break after four tries. Their development pack bullied the Australians in the opening exchanges, with hooker Luka Connor scoring two tries from the rolling maul. Tries to fullback Olivia McGoverne and debutant backrower Ilisapeta Molia added to Australia A's woes. The Aussies had a few chances late to attack, moving the ball out wide but could not capitalise on their chances.
With the wind at their backs in the second half, the Australians were hoping to reverse their fortunes but things started poorly, with winger Langi Veainu dashing over just minutes after the restart. Australia continued to have difficulty matching the strength of the Ferns in the forwards, with tighthead prop Leilani Perese barging over from a pick and go to incready the Kiwis' lead to 36-0. The depth of the Black Ferns program was on show in the second half, with the New Zealanders losing none of their dominance despite making several changes in the final quarter. The Ferns added another two tries before the fulltime whistle, with Australia A unable to find their way to the tryline despite dominating possession for the final 10 minutes.
Black Ferns Development 50 (Tries: Connor 2, McGoverne, Molia, Veainu, Perese, Lolohea, Moata'ane. Cons: Tubic 3, Rasch 2) . Australia A 0
Australia A: 1 Toa Filimoehala, 2 Averyl Mitchell, 3 Christina Sekona, 4 Michaela Leonard C, 5 Sera Naiqama, 6 Kirby Sefo, 7 Fi Jones, 8 Piper Duck, 9 Georgia Cormick, 10 Arabella Mckenzie, 11 Alana Elisaia, 12 Georgina Friedrichs, 13 Kennedy Cherrington, 14 Maya Stewart, 15 Courtney Hodder. Reserves: 16 Tasmin Sheppard, 17 Bree-Anna Cheatham, 18 Eva Karpani, 19 Tiarah Minns, 20 Grace Kemp, 21 Remi Wilton, 22 Zahara Temara, 23 Sammie Wood.
Black Ferns Development: 1 Angel Mulu, 2 Luka Connor, 3 Leilani Perese, 4 Chelsea Bremner, 5 Kelsie Wills, 6 Ilisapeta Molia, 7 Kennedy Simon, 8 Pia Tapsell, 9 Arihiana Marino-Tauhinu C, 10 Hazel Tubic, 11 Langi Veainu, 12 Kilisitina Moata'ane, 13 Grace Brooker, 14 Natahlia Moors, 15 Olivia McGoverne. Reserves: 16 Forne Burkin, 17 Eilis Doyle, 18 Amy Rule, 19 Alana Bremner, 20 Joanna Fanene, 21 Melanie Puckett, 22 Amanda Rasch, 23 Martha Lolohea.

A spectacular second half performance from Fiji who beat Samoa 26-7.

It wasn’t t a good start from Fiji as Samoa built the momentum early and managed to hold the play within Fijis 22 throughout the first 14 minutes. A nice clean break from Fiji’s Elenoa Adinaimata got them out of their 22meter zone right to down to Samoa’s 22 meter line before losing the ball, which was picked up by Samoa’s Apaau Mailau who ran 50 meters down the field with support play from Samoa center running in for their first try.

Fiji manage to gain territory through the strong run from the forwards before Lavenia Tinai ran straight for the try line dotting Fijis first try. It was a 7 all point game as both teams headed for the half time break.

The Fijiana came into the second half  with a much more structured play and executed some clinical finish. A clean break from Lavenia Tinai with a nice offload to Pricilla Siata who run straight to score their second try.

Another swift move came in from Mela Matanatabu as she slick her way through a gap between the defending line running straight through for their third try. Fiji continue to mount pressure on Samoa in the dying minute within their 22 while Ada Dansey crashes her way through defenders to score the final try of the match.

Fijiana head coach Alifereti Doviverata explained that the girls executed well and followed through their game plans. “We came here for a win and the girls did just that, they executed our structure well which got us what we wanted today, a win”