O'Donnell buzzing to be back in white

England lock Catherine O’Donnell is “buzzing” to be part of the international fold once again, having made her first Red Roses appearance for nearly two years in Saturday’s Women’s Six Nations win over Scotland, writes Peter White. 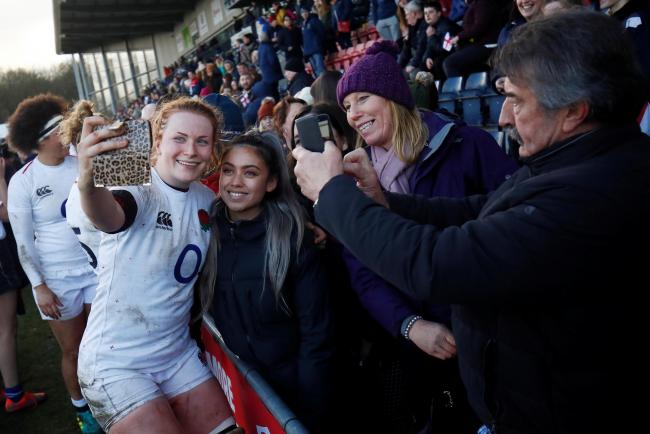 Twin sisters Bryony and Poppy Cleall scored a try each as the double defending champions kicked off the campaign with a handsome 52-10 victory, with Marlie Packer, Leanne Riley, Lark Davies, Jess Breach and Helena Rowland also crossing, in addition to a penalty try.

Such a result capped off a perfect weekend for 24-year-old O’Donnell, whose 63 minutes of Championship action in Doncaster saw her win her 17th England cap, her first since defeat to New Zealand in San Diego, USA, in the summer of 2019.

Persistent injuries halted her progress after she had burst onto the scene in 2018 and started four of five Six Nations games as England won the 2019 Grand Slam, but the Loughborough Lightning star is now fit and raring to make up for lost time.

“I had some pretty serious shin splints after the 2019 season, and when I got them scanned it turned out I actually had fractures in both sides of my shins,” she said. “Just before that we found out I’d done my ACL as well, which was obviously very serious.

“It was tough because especially with a lower limb injury you have to build it back up really slowly. At the start I basically had to be off my feet completely, and really slowly I was able to go on walks and bike rides.

“I had great support from the RFU and even though rehab can get really difficult, it’s just important to focus on that end goal. I didn’t miss as much rugby as I might have done because of the lockdown, and I think I have a much better understanding of the load I can cope with now.

“I played five games for Lightning [before the Six Nations] - I still feel I’m on the upward curve towards full fitness but I’m getting there. It felt very strange on the morning of my first game back against Bristol, but I got my hands on the ball and managed to score a try which was great.”

Having balanced the start of her international career with a master’s degree in work and business psychology at Loughborough University, O’Donnell admits the sudden void of on and off-field demands took some getting used to.

So too did watching from the sidelines as England backed up their 2019 exploits by clinching the 2020 Grand Slam without her in their ranks, which fuelled her motivation to fight back to the top level.

“During the first Six Nations everything was crazy,” she said. “I look back and wonder how I did it because I was balancing multiple modules, my dissertation, trying to learn lineouts and everything else.

“I graduated in 2019, and suddenly being injured I didn’t really have loads to do. It was really weird. During the first lockdown I built a deck in the garden with my brother, and focused on making the most of some family time.

“It was tough watching the Six Nations on TV because you’ve got to strike a balance between encouraging the girls and not being too gutted you’re not out there. But injuries are just part of the game.

“I maybe saw things from a different perspective in terms of seeing how quickly things can be pulled from under you. It makes you realise how much of an honour it really is to play for England.”

After playing her part in victory over Scotland, O’Donnell is now focused on securing a second successive Pool A victory against Italy on April 10, which would earn England a spot in the competition’s showpiece finale.

That could throw up a winner-takes-all battle with 2018 Grand Slam winners France - who thrashed Wales 53-0 in their opener - but O’Donnell insists two-time world champions England will be braced for any challenge put in front of them.

She added: “I think the format will go back to normal next year, but for the moment we’re all just happy to be able to play. I think it being a standalone tournament puts more focus on the women’s game as well, which is great.

“Reaching the final and winning the tournament is the main aim. We’ve been training really well and looking clinical, so we just need to stick to what we’ve been doing behind the scenes.

“We know playing against France is always a huge battle. They’ve got loads of heart and they’re really proud, so we know that would be a tough game. But I think we’re more than ready for anything thrown up at us.”