Dublin side Old Belvedere beat UL Bohemians in Donnybrook 19-17 to make it three All Ireland League titles in a row at the weekend. 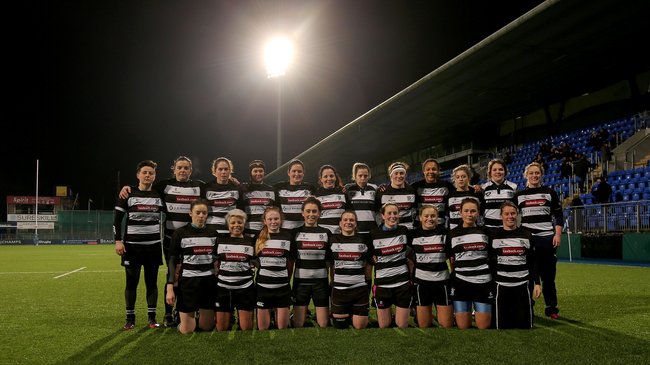 Old Belvedere time their run of form to perfection, having finished third in the regular leage season, and having overcome neighbours Blackrock in the semi-finals, they edged the narrowest of finals in a game played under lights in Ireland's capital.

They took an early lead through Franziska Klappoth but UL-Bohs, featuring Irish skipper Niamh Briggs in the number 10 shirt, started to build the pressure through some intelligent kicking, and another Irish player Fiona Hayes burrowed over the line after 20 minutes with Briggs adding the extras to give the Limerick team a 7-5 lead.

Belvedere continued to apply the pressure to UL, who had finished the campaign at the top of the table and the Dubliners hit back before the break with some fine linking play and Emer O'Malley got on the end of an excellent passage with Nora Stapleton converting to give her side a 12-7 lead at the break.

Stapleton was to the fore again in the next score of the game with a superb individual break taking her over the tryline for a score which she converted but Bohs weren't out of it yet with Syphonia Pua scoring to bring them back into it.

Belvedere were able to call on replacements like experienced Irish lock Marie Louise Reilly, coming back after a long injury break and her arrival helped a trojan defensive effort as Bohs piled the pressure on again. As the game came to a close, Boh's got one back through the pace of Liz Bourke, handing Briggs a chance to level the match and take it into extra time but from a tough angle she missed, and the title stayed in Dublin.