Its been a great week for New Zealand rugby, and a disappointing one for Australia as their greatest rivals added to their Commonwealth Games triumph by ensuring that the Olympic Youth champions will not be defending their title in Montevideo. 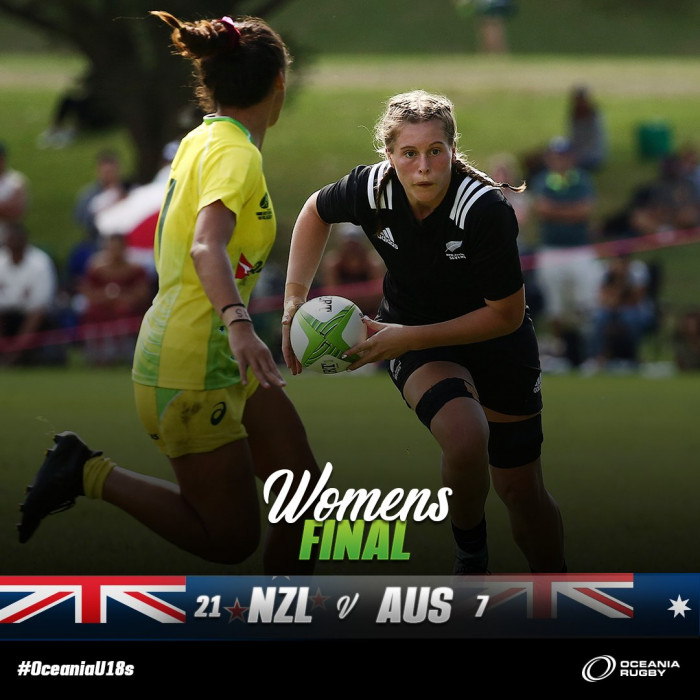 After two Commonwealth Youth Games and one Olympic Youth Games, Australia U18’s golden run came to an end at St Ignatius College in Riverview, NSW, this weekend as they were beaten in the final of the first Oceania U18 sevens.

Only three girls’ teams took part in the inaugural event – Fiji being the third. Unfortunately Fiji U18 were outclassed, only managing one try over the whole weekend, so the tournament was only ever going to be between Australia and New Zealand.

They met twice in pool play, New Zealand leading most of the Saturday game to win by 26-17, and on Sunday taking a 15-0 lead into the break only to see Australia come back and sneak the game 17-15, Quincy Dodd’s conversion being the difference between the sides.

The final was expected to be close, and it was. First-half tries from Montessa Tairakena and Iritana Hohaia for New Zealand giving them a 14-7 half-time lead, Hagiga Mosby getting the Australian try. The tickets to Montevideo came down to the final seven minutes, and it was Tairakena’s second try that ended Australian hopes.

However, if U18s is as much about individual development as it is titles, the name to watch for the future is undoubtedly Montessa Tairakena, the New Zealand wing who scored 11 tries over her five games – more than a quarter of all the tries scored over the weekend. Australia’s flyhalf Hagiga Mosby was the next in the list with just four. The boot Young Fern prop Risaleaana Pouri-Lane also stood out as she sank six conversions.