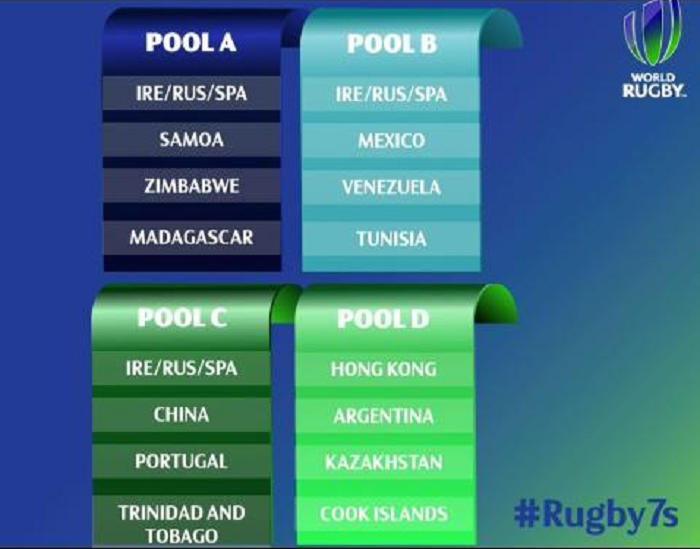 The Olympic Repecharge takes place in Dublin next month with not just a place in Rio at stake, but also a place in next year’s World Series. The winner of the tournament goes to Rio, but the best placed team – not including Russia or Spain (who have already qualified) – win a place in the 2016/17 World Series, a tournament which will itself be a qualifier for the 2018 sevens World Cup.

In theory the top seeded teams in Pools A-C are undecided as they will depend on the final places in the World Series, but in practice Russia will almost certainly be in A, Spain in B and Ireland in C.

A four-pool sixteen-team tournament means that teams have to finish in the top two to make the quarter-finals – third place means elimination. In practice this will not be a problem for Russia or Spain who should stroll through their pools. It is slightly scary to think what sort of scores Russia could rattle up in their pool (especially against untried Madagascar or Zimbabwe, who have never played outside Africa before) and, while Mexico and Tunisia are slightly more experienced, Spain should win their pool comfortably.

Pool D will be fascinating to see whether Argentina can overcome the two Asian challengers (and Cook Islands should not be overlooked), but the Pool of Death title really goes to Pool C.

Ireland start as favourites and, while Trinidad will cause no difficulties, China are more than capable of causing real problems (their performance in the World Series qualifier in Dublin last year was uncharacteristically poor) and Portugal, while they love their reputation as the upset team, are determined this year to go further. Ireland, China and Portugal all deserve places in the quarters, but only two can make it.