By Alison DonnellyEngland kept their winning run intact with a 22-5 victory over Ireland at Esher. In Ireland’s 100th outing in international rugby they did manage to break another record – becoming the first team in this championship to score any points against an England team who look certain to win this title now. 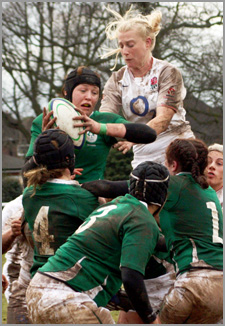 Ireland got off to a poor start when they conceded two tries within the opening 10 minutes. First, flanker Claire Molly was penalised for holding onto the ball on the deck and Katy McLean drilled the ball into the corner and then from the lineout England drove their maul towards the line. The bigger English pack used their strength pushed Maggie Alphonsi over for the first score.

England scored again just minutes later. Ireland fullback Niamh Briggs had opted to keep the ball in hand in her own 22 and as Orla Brennan crashed it up, England flanker Heather Fisher brilliantly pinched the turnover and moved the ball wide quickly to set up Emily Scarratt who took Englands lead out to 12 with McLean adding the conversion.

The shaky start though suddenly helped Ireland stir to life. First a nice break from Amy Davis down the wing gave Ireland better territory and from a neat lineout Irelands driving maul tore into the England defence.

The maul was working wonders for the Irish and they adopted it again and again as they won numerous penalties in their own 22 where they opted for the lineout each time. It was the right call because a well organised drive finally saw Kate OLouglin crash over to bring the score back to within 7. It was the first try England had conceded in this championship so far and it gave the visitors much more confidence.

McLean missed the opportunity to put a bit more daylight between the sides when she skewed a penalty attempt and a much better passage of play from Ireland followed with some nice touches from Joy Neville and Marie Louise Reilly giving the visitors momentum.

Englands defence was pretty sound overall however and as they two sides traded possession neither could find a way through well organised rearguards.

Englands real advantage was in the scrum and they managed to push the Irish off their own ball and win a couple of penalties in the first half but Ireland were managing regardless with the boot of Niamh Briggs helping them into Englands half. The Irish were also managing much better out wide with the England threat than they were earlier in the half, with Alice Richardson and Scarratt much better marshalled as the half time score stayed at 12-5.

Defence was the name of the game after the break with both sides effectively shutting each other out in the opening exchanges with some crunching tackles and solid line organisation.

England had the majority of possession though high up the pitch and the pressure eventually told as they used their maul effectively and then moved it wide where Clare Allan hit the line at pace and evaded a tackle or two before touching down. McLean missed the kick

When Ireland had the ball they failed to get width on their play quickly enough and with the pressure in the scrum maintaining throughout the game, their chances to get back on the scoreboard were too few.

Englands next score came against the run of play, as Ireland had been on the attack and making good ground but a turnover saw the ball moved quickly through the hands and some excellent offloading between Maggie Alphonsi and skipper Catherine Spencer Spencer helped Scarratt set up the replacement Amy Turner for a healthy England lead (22-5) with just ten minutes left.

England were getting on top now up front especially with a dominant maul and good play around the fringes stretching the Irish defence.

Although beaten, Ireland ended the half on the attack with replacement Grace Davitt making an impact in the middle and they also managed to shore up their scrum somewhat.