Over the past five years, we've written about hundreds of players involved in the international women's game. As part of our week-long fifth birthday celebrations, here we pick the five players we believe have influenced the game most over the period between 2009-2014. 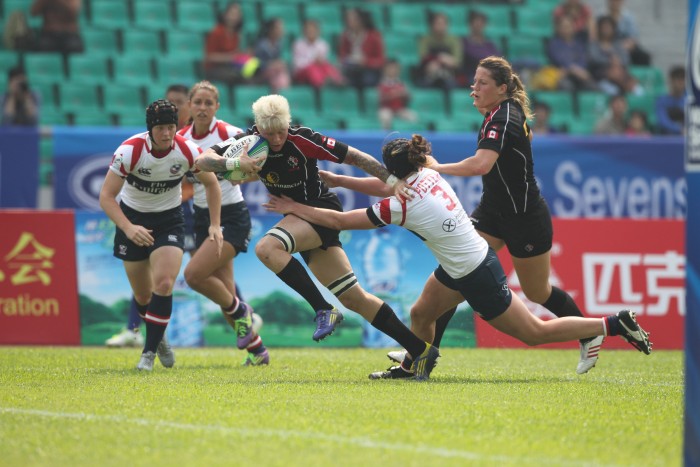 Maggie Alphonsi
Alphonsi annouced her international retirement recently after earning 74 caps over an 11-year career, winning a record-breaking seven consecutive Six Nations grand slam titles. Add to that a World Cup title in the summer and all in all, the England back row can reflect on a glorious test career. Alphonsi is one player who can lay claim to being one of the most recognisable women's rugby faces in the world. Always well known in the women's game, her stature grew enormously after her outstanding performances in the 2010 World Cup, where she excelled in a tournament which generated then, record media coverage and attendances. Despite injuries hampering her in the following seasons, her role as an ambassador for the Rugby World Cup (men's) kept her face in the game and she returned to play a huge role in Engand's World Cup success in Paris this summer. Alphonsi helped to break the mould in the women's game with her shuddering tackling and all round physicality along with her affable nature off the field and when you consider that two of her best England performances were in two World Cup finals then you understand the reason for why she has always generated great public interest. When Sky Sports dubbed her "the machine" the name stuck, and she has helped to pave the way for widespread acceptance of the women's game as fast, tough and physical. A game-changing player in every way.

Baizat Khamidova
Separating the myth from reality with Baizat Khamidova is tricky at times. The legend sees Russian coach Pavel Baronowski hearing about her and her sister and trekking for days through the Caucasus mountains before reaching her remote village and signing them up on the spot. Whatever the truth is, Baizat was the lead in a team that helped take Russian women’s rugby from European also-rans to potential Olympic medalists in less than four years.
Not so long ago women's sevens was a sport based on speed and Russia was a mid-ranking European sevens team on the same level as Germany. Then along came a new Russian team which, with Baizat Khamidova (and sister Navrat, who initially seemed to major force) in the vanguard, bringing a whole new level of physicality to elite women's sevens. Some leading teams were almost literally knocked backwards, with Khamidova in particular seeming almost unstoppable with ball in hand. The talent was raw, but this was the future, and on the fledgling IRB circuit the lesson was clear - adapt or die. Today Baizat has matured into a force to be reckoned with both in attack and defence, and Russia have gone from being somewhere outside the top five in Europe to consistently inside the top five in the world – and European champions two years running.

Fiona Coghlan
Ireland's long-serving captain hung up her boots recently and after 12 years and 85 caps, she retired the most successful captain in the history of Irish rugby. Given where Ireland were when Coghlan first came into the team in 2002, she has led the team through extraordinary change and progress, against a backdrop of sometimes real challenge in Ireland’s rugby growth. Coghlan captained Ireland to its first ever Six Nations title and Grand Slam in 2013 and to fourth at the recent World Cup, both huge achievements. She has been an assured leader as Ireland climbed the rankings and speaks well and articulately about the future of the game there as well as women’s sport and its challenges and about the global game of women's rugby and its future. When the future of the Six Nations was threatened last year, she was one of the few current players willing to speak out against it, and in Ireland, where media coverage and interest in the Irish team has experienced a meteoric rise, she has been an excellent leader and has helped keep her side’s feet on the ground amid dizzying highs.  Lynne Cantwell is another senior Irish player who deserves great credit for role in their success on and off the pitch, but Coghlan’s role in the centre has been superb.

Kayla McAlister
In 2009, few had heard of Kayla McAlister but anyone who has followed the rise of women’s sevens since then will know all about her.  Well known in New Zealand when she came through to the national side as much for her family’s involvement in the game as for her netballing ability (McAlister played with franchise side the Mystics before she moved to rugby), she took to rugby like a duck to water and in 2012/13 ran up 16 tries during the World Series and was a standout as New Zealand lifted the Sevens World Cup. McAlister’s rise and story in the game is an excellent tandem to the rise of women’s sevens in general. A star on the world circuit, her ability has shot her to prominence and she was named within a year of appearing as the IRB Women’s Sevens player of the year. She is also the epitome of the idea of talent transfer in women’s sevens –whereby players from other sports find the appeal and lure of Olympic rugby a real pull and are excelling in the short form of the game. The addition of Commonwealth Games rugby will add further interest for many players who have the ability to make the switch and there will be plenty more McAlister’s to come.

Jen Kish (pictured)
If there is one story that sums up Jen Kish it is that of her first tattoo. She got it when she was 16. It’s big, brash, clear for all to see emblazoned on her right calf. It’s the Rugby Canada logo – and she had only been playing the game for barely a year. This was a young woman full of self-belief, and determination to succeed – a description that almost perfectly expresses her style of play on the field to this day. Jen began as a gridiron football player, but was persuaded by her coach to try out for her high school rugby team in 2004 when she was 15. By 2009 she was captain of Canada’s U19 team, and soon made the passage into the adult game. She has found her true home in the sevens game and as captain she has been central to Canada’s success, culminating perhaps at the 2013 Sevens World Cup where Canada finished runners-up and she was nominated for the IRB’s Sevens Player of the Year. In many ways her story encapsulates the success of Canada’s development programme, and she would be first to point out that she is surrounded by other talented players on the field and a high quality coaching team off it. But she has been at the core of that success and if her heart is not on her sleeve it’s certainly on her right calf.