Richmond will play Worcester and Saracens will play Lichfield in the English Women's Premiership semi-finals after the final round of regular league games confirmed positions over the weekend. At the other end of the table Bristol will play Aylesford Bulls while Wasps will take on Darlington Mowden Park Sharks.  The playoffs take place on the weekend of January 9/10. 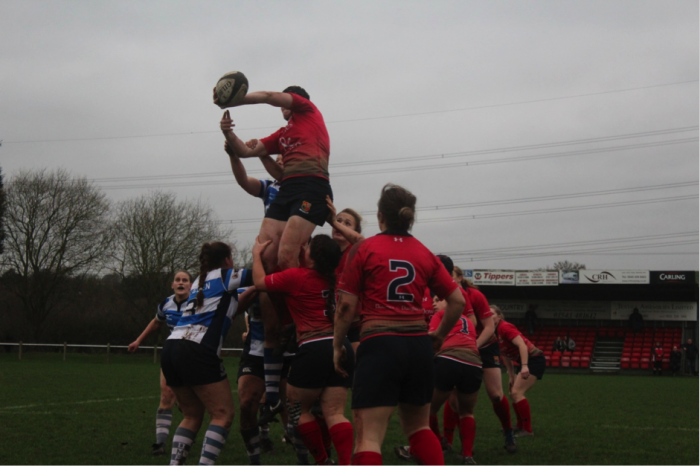 Lichfield secured a five try bonus point win to confirm third place in the league and a place in the end of season play-offs – equalling their best ever finishing position in the table.

Both teams started strongly, with DMP Sharks particularly impressive in defence. Both sides managed to repel the early attacks, until DMP Sharks deservedly took the lead after 16 minutes with a converted try from right wing Rachael Woosey. This only served to settle Lichfield’s nerves and they immediately began to play with more composure and test the DMP Sharks defence to the limit. Holly Aitchison made the first breakthrough for Lichfield after 28 minutes, beating two covering defenders to touch down under the posts, Sarah Nicholas converted to bring Lichfield level at 7-7. Sharks managed to keep Lichfield out until the 40th minute, when the irrepressible Harriet Millar Mills scored her first try to give Lichfield a 12-7 half time lead.

The second half proved to be a completely different story, Lichfield, playing with the wind took complete control in the forward battle and in a virtuoso performance of power and precision, Harriet Millar Mills added three tries after 44, 62 and 72 minutes to give Lichfield the win. Two of the tries came from pushover scrums as Lichfield’s front row of Katie Trevarthen, Amy Cokayne and Karyn Robertson completely dominated and drove the Sharks backwards, allowing Millar Mills to control the ball at No.8 and touch down. Sarah Nicholas converted all three second half tries to bring the final score to 33-7.

Bristol’s defeat at Saracens last weekend meant that their final game was a must win to secure fourth position.

But opponents, Worcester also had the same aim and so it was do or die for both in their quest to make the playoffs.

Worcester started the game with power and purpose, pinning Bristol in their 22 for the opening 26 minutes, denying them any ball at all. Bristol had defended this period magnificently with England captain Sarah Hunter prominent. The deadlock was broken following two forward surges where the ball was held up and player of the game Lisa Campbell dropped in the back line, taking collecting the ball fired out from the ruck she evaded three defenders running powerfully to cross the line.

The second half saw Worcester sustaining the pressure, their line out working well and consistently for probably the first time this season. The Bristol defence were kept busy by the home sides smaller and lighter, but dominant pack, and the powerful running of Kelly Smith, Zoe Bennion and Rachel Lund from the backs. Much to the relief of their supporters and coaches, they eventually increased their lead, Campbell kicking a penalty to the corner followed by an excellent catch and drive with the on fire Campbell, certainly leading by example as captain in the crucial game, again crossing the line.

After 60 minutes Bristol did put some impressive moves together but found it very difficult to get beyond the home 22, with Smith, Lydia Thompson, Lund and Bennion all tackling ferociously along with young Rhi Donnahey causing havoc at the breakdown.

Worcester effectly sealed victory and their place in the play offs with a third try from the irrepressible Rochelle Clark, driving over after sustain pressure on the Bristol 5m line in 73rd minute.

Saracens were far too good for Aylesford Bulls at home, despite the difficult conditions. Despite a decent start by the travelling Bulls, Saracens took the lead through a fine finish from England's young winger Lottie Clapp with Lauren Cattell adding the extras.

Aylesford hit back with a try of their own, after some strong set piece play but that was about as good as it got as Poppy Cleall crashed over shortly before Ama Mayes who grabbed a third. Before the break Hannah Gallagher and Cleall were over again, with some excellent line breaks making the hard working Bulls defence work extremely hard.

Leading 29-5 at the turnaround there was no let up as Olivia de Merchant and Cattell were over the line early for two more tries before the gates opened again later in the match for the commanding win.

Saracens will go into the semi-finals full of confidence with players like Cattell, Cleall and Clapp in fine club form.

Despite a hugely competitive first half where Wasps forced Richmond to battle for every point earned, Richmond ran away with this one at the end and will go into the semi-finals in fine form.

The game was a final league outing for Wasps and England prop Claire Purdy and her side got off to a decent start against a side who have had the upper hand on them for some seasons.

But it was the hosts who broke the deadlock with a try for Elisha Dee who dove over after a well worked lineout. Wasps then knocked over a penalty to reduce the arrears to two and then Richmond made a yellow card work in their favour when good patient build-up and phase play saw a score for Amy Turner which Abi Chamberlain converted.  Richmond had a yellow card of their own soon after, and though Wasps found good territory they couldn't make it count and the score was 12-3 at the break.

The heavens opened after the turnaround but a quick score from Debs McCormack meant Wasps had a mountain to climb training 19-3. They worked hard though and a try and conversion brought them back into the match. Richmond though showed their power and experience with a try from Vikki Cornborough after a powerful run. Richmond were dominant in the closing exchanges with two more tries and a convincing scoreline.