Plenty to work on for USA

Shaina Turley (pictured on tour far left) played for the USA women’s 7s side at the IRB Dubai Rugby 7s recently. Her side were the plate runners up. Turley, who is also capped at 15 aside level for the USA, shares her thoughts on the tour. 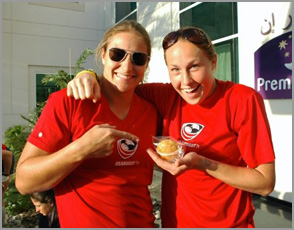 I left Florida the Sunday after Thanksgiving for two flights to D.C. followed by a 13 hour flight complete with elaborate rest and eating plan to arrive in Dubai, UAE on Monday evening, December 1. After hours of organizing ourselves and checking in to the hotel, we all dropped our stuff in our rooms and did a post-flight workout together before getting some sleep.

The next morning, things started off quickly as we were given our tour kit, discussed our goals/strategy for the tour in a meeting and then departed the hotel for the first of five training sessions designed to both knock the hell out of us and indoctrinate us with the mental toughness and aggressive attitude we need to destroy our opponents. I personally enjoy this type of game plan and found the trainings to be really useful, if unforgiving. It is humbling though, to think you're tough and then get your butt kicked repeatedly in 7's training. And much love to the 15's props out there...my neck was KILLING me from mini-scrums!

Another good thing about tough training is that the team bonded pretty quickly and we were making fun of the props, akward physics students, older players, and ourselves almost constantly.

After all the training, and observing, and eating, the day finally came that we got to play.

The team woke early to eat, have a recovery session, and travel to the pitch. Most of us were a bit nervous to play in this big of a tournament for the first time, but excited to get the chance to execute our game plan. We were also pumped to take on France first. I started the first game that morning and came out very aggressive, but disjointed defensively. In fact, I made a few crucial errors that allowed the French team to get some runs down the field and by the end of the game, France had edged us 21-12. Taking that game in stride, we talked over our adjustments and began preparing for our next game against Moscow Region (basically Russia). This time, we played in the big stadium and it was unreal. Once we got over the fact that we ran out of the tunnel with all our bags on us, looking like we were moving into the field, the game went very well. The team connected better on defence and pressured Moscow into making mistakes. We won handily and hearing the roar of the crowd as we sealed the victory was an experience I won't soon forget. We then had a long break before our last two games, so we ate and slept (two things that were becoming second nature). That evening, we played TUKs, a team from South Africa, and then Bangkok. We lost against Tuks but then pounded the Thai's using our aggressive defense. That last game didn't end until late and it was about 11:30pm before we all got back to our rooms to get some rest for the next day.

I woke up at 0545 to the familiar post rugby pain and a hallway warm-up courtesy of Grif (our high performance manager). Then it was off to breakfast and then the pitch for the big day. The first match was our quarterfinal against the Wooden Spoons, a team from England who had won the tournament the year before. I started the game and we came out pretty strong and aggressive, but couldn't seem to secure possession causing us to play defenxe almost the entire game. The Spoons ended up winning, but our continued improvement throughout the tournament was becoming evident and I was excited for the next game. We faced Kenya in the Plate Semifinal, and took the game to them. Using our fast wingers and aggression to secure possession, we beat them handily and earned our trip to the Plate Final against Scotland in the afternoon. By this time my face was resembling an apple that had been used as a basketball, and passersby were starting to give me the "I have a number you should call" concerned look, but I was ready to play. Scotland looked like they would be a tough team, but we were up to the challenge. I got to start this game, and came out of the gate hard. Several times we put them under pressure, but their scrappy defence kept us from the try zone. I got in a few good tackles and was able to force turnover ball, but we went into the half tied. The second half saw Scotland tighten up their previous mistakes and seal their win by the 14-minute mark. We had played the best game of our tournament and only managed to walk away with runner-up for the Plate, so many of us were disappointed. I know that this experience will definitely serve as motivation for a young squad to put the work into becoming ridiculous ruggers, so I guess losing in this case will become an important motivator for more important tournaments in the future. All in all, it was amazing to be exposed to rugby 7's on this level and it's exciting to think what the future holds for USA Rugby internationally.

Following the match, the team took ice baths, showered and watched some of the men's games and the women's final before heading to the hotel to pack. France, who we had lost to our first match, ended up beating the Wooden Spoons for the women's cup using a brutal defensive style that kept the spoons on their back foot the whole game. So, the week had been a blur and we couldn't believe we were leaving already. As a group, we took in the men's final at the hotel bar, watching as New Zealand powered past Samoa to be the Dubai 7's Champions. I briefly imagined playing in the final in the future, working out mentally how much work would need to go into my preparation, and filing away that thought for motivation during training. We as a team discussed goals and the future in our end of tour meeting and then we headed to the airport almost as quickly as we had arrived.

So bye for now...I'll be in Florida learnin' to fly and training for the next time I get to play the greatest game in the world.