Pool B: England and USA set up pool decider

Big wins by both England and USA set up what will be, in effect, a quarter-final for the two teams next week. 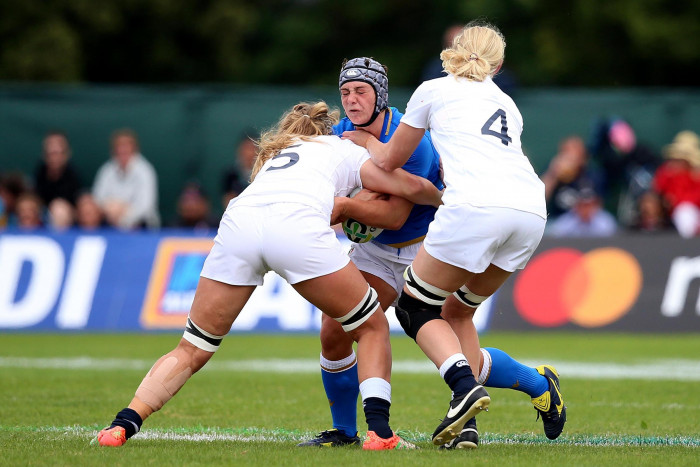 England made it two from two with another comfortable win in their pool, beating Italy 56-13

England’s form players included backs Danielle Waterman, Rachael Burford and Katy Mclean, who are using all of their experience to help England find space and exploit weaknesses in the wide channels.

Also impressive was Marlie Packer who made a strong start, full of vim and vigour in her running game, with Amber Reed controlling it well as England held all the early possession.

Italy showed their ability in flashes but they couldn't compete with England at the breakdown and they will turn their attentions to their big clash with Spain in the next round to really get their tournament going.

England were over the line after 5 minutes but Amy Wilson-Hardy was held up, and the same player dropped the ball just a minute later when she looked odds on to score.

The opening try eventually came after a typical blitzing run from Waterman with Emily Scarratt stretching out to finish off perfectly.

Alex Matthews hit a killer line on the 15 minute mark after Wilson-Hardy had gone on a mazy run for the next try but Italy got on the board shortly after with a penalty kick from Veronica Schiavon.

Fullback Manuela Furlan was making an impact every time she got involved in the wide channels and after some fine play up front with the entire front row involved in the handling and passing, the ball move wide and Rigoni linked up with Maria Magatti who slid over in the corner to make it 12-8.

England’s driving maul was then to the fore as the drove Italy back 15 metres and Lydia Thompson was on hand to finish off and despite some good defensive work from Italy when Amy Cokayne powered over before half time, it already looked a long way back.

On at halftime, Katie Mclean made an immediate impact after the break. pulling the strings to help Tamara Taylor over for the first try of the half before putting Scarratt into space for her second.

Italy went to one of their key strengths when they found themselves in England’s 22 and a brilliant driving maul brought them to within inches with Elisa Giordano driving over to bring the score to 34-13.

England hit back straight away with a try to Waterman who added another just a few minutes later as England upped the tempo and began to find holes all over the field as Italy tired. Meg Jones made a nice impact from the bench, setting up Thomspon before Wilson-Hardy scored at the very end.

A 43-0 win for USA was an impressive outcome in a game that a week ago looked too hard to call.

Spain’s problems again began from the start when again the kick-off was dropped, putting them under huge pressure, resulting eventually in the USA’s first try after five minutes, with Tapper completing a passing move down the backline to score in the corn, Kelter converting. USA were 7-0 up and Spain had yet to leave their half.

The rest of the half was characterised by USA dominating possession, but largely failing to benefit – not helped by some poor discipline which eventually cost them a yellow card, for Sara Parsons, at the end of the half. Spain, on the other hand, defending well and – despite having a much lighter pack – rather dominating the forwards clashes, but not taking advantage themselves as a result of too many largely unforced handling errors.

A second American try – Jordan Gray crashing over from 5m out – added to the US lead after 34 minutes, but the halftime lead was only 12-0, with Spain ending the half inside the US 22.

Problems with the Spanish lineout proved expensive early in the second half when two of Spain’s best attacking position were lost through poor throws, allowing the USA to get back on the offensive. A great run by Alex Kelter almost added to the score, before Ember scored their try on 50 minutes. Within minutes a great break by Rogers setup another attacking platform that saw Tapper eventually being driven over under the posts by Kelter. A penalty try for a collapsed maul then put USA 31-0 ahead as the game entered the final quarter.

Spain had their moments – Echebarria and Erbina had some great runs – but so often attacking opportunities were lost by poor passing or handling, allowing the USA to put the pressure back on, and on 78 minutes another try came, Jessica Javelet getting on the end of a well weighted kick-through from Kelter.

Then two minutes later the final score, which typified the USA’s performance, first a run from Tapper split the Spanish defence, Kelter took it on, and then Roger crashed through for the final try.  If the USA can deal with their discipline they could give England something to think about next week.