Pool B: England & USA still in the Cup

Two back-to-back games in Pool B saw England beat USA comfortably, but USA are still in the Cup - and Spain recorded a good win in their game against Italy. 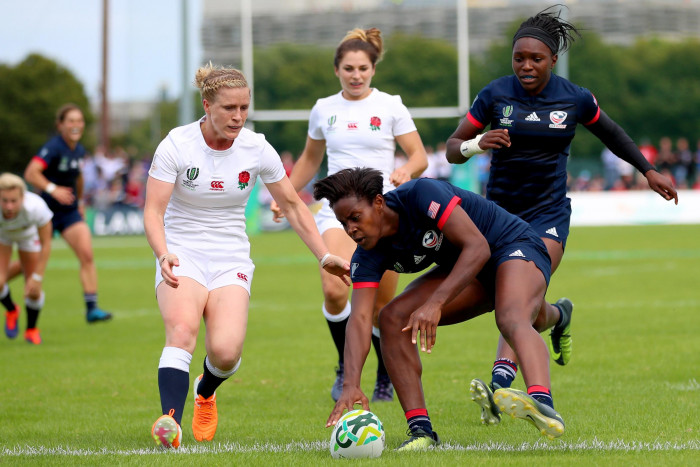 What was expected to be a tight encounter showed again how strong England are.

Sarah Hunter’s early chargedown of a kick from Cheta Ember set up England’s first chance, but a 25m penalty only slightly to the right of the posts was missed by Emily Scarratt.

It mattered little, however, as shortly afterwards on 11 minutes Scarratt herself was fastest to a loose ball behind the US line to start the scoreboard running.

England’s maul has not been a significant feature in this World Cup so far, but they now turned to it – and the USA had no answer. A penalty try on 16 minutes from one maul was followed by an almost identical move and try four minutes later, Marlie Packer getting the score. Packer added another, in the same way, on 26 minutes and England were running away at 28-0.

The USA were not going to lie down, however. First Thomas was held up over the line, and then Washington rescued the ball from a US scrum that was going backwards to set up Kate Zackery for the first American try.

US defence was found wanting at the end of the half, when McLean spotted a huge gap, and at the start of the second, when Scott was allowed an unchallenged 15m run into the US half, setting up a move that ended with a try for Wilson Hardy. Amy Cokayne added another try shortly afertwards and England were running away at 47-7.

After that, however, the USA fought back. First a try from Emba and then – with England pulling on their bench – Tapper and suddenly the USA could see the possibility of a vital bonus point that could put them in the semi-finals.

And that try finally came from the final play, Kristen Thomas getting would could be the vital score. England had won by 47-26, but both teams left the field still in the tournament.

A match that was for so long exactly what we expected it to be – a close, exciting game. For most of the first half Spain had most of the possession, and should have scored after three minutes when Paula Medin just failed to take the final pass with the try line open.

Handling errors at crucial moments frustrated both teams and it was not until the 29th minute before the first points were on the board, from a penalty by Michela Sillari for Italy.

The lead did not last long when three minutes Patricia Garcia brought the game level with a penalty of her own – and it was a 3-3 that the first half ended.

Spain continued to dominate possession in the second half, which also should have started with a try by Fernández de Corres’s pass to Pla went over her head. However, within three minutes Spain finally crossed the line with a great team try ending Anne Fernández de Corres getting the ball over the line. 10-3.

Three minutes later came perhaps a game changing moment when Italy thought they had pulled a try back from a try by Rigoni in the corner – only for the TMO to spot an infringement at the ruck that set up the move.

Spain went further ahead on 64 minutes, with a great run from Iere Echebarra to score their second try. When Maria Bravo then added a third with just 12 minutes to go the possibility of a potentially vital bonus point suddenly became possible.

But it was not to be. Italy regrouped and with five minutes left it was Baratin who scored for Italy.

As a result Spain will be the unlucky third place team and miss out on the 5th/8th play-off, just as they did in Paris in 2014 (and as they had a habit of doing in the WSWS!).