Ireland survived a massive scare against Japan, coming from 14-0 down at haftime to come out and score three second half tries to win it 24-14. France then put in an glorious exhibition against Australia, knocking them out of contention for the semi-finals. 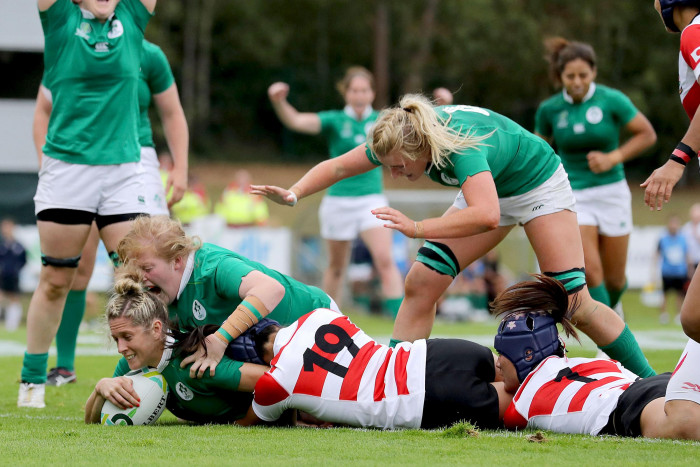 This was hardly the performance Ireland would have wanted, going into their crucial game against France later this week, but a win is a win, and Ireland's bid to top the pool continues.

Ireland started well enough with a wealth of possession and with Ciara Griffin carrying hard. but Japan showed early that despite their size disadvantage, they would not be cowed in the tackle.

Ireland's problem with accuracy reared its head again early, with numerous handling errors killing off promising opportunities in good areas of the field while back in her own 22, Mairead Coyne's knockon handed Japan an early scrum deep in the Irish 22.

A wobbly couple of early lineouts were also enough to unsettle Ireland, and despite a fine couple of charges by Ali Miller down her wing, Ireland could do little to string together a promising attack.

Japan then sprang to life with a superb break from Eriko Hirano who was felled illegally by Coyne and won her side a well positioned penalty.

Though nothing came of that, Japan kept the pressure on and realising that they had Ireland under huge pressure at the scrum, packed down from a penalty and a massive drive saw them awarded a penalty try, much to the home crowd's shock.  Tom Tierney called on Ailis Egan after just 30 minutes to help shore up the scrum, as the pressure built on the hosts.

Japan fed off the Irish nerves and scored again just before the break, with Mayu Shimizu on the end of a fantastic passing move - no less than Japan deserved - and they turned around 14-0 up, on course for a huge shock.

Ireland made several changes at the break, but started poorly again, this time Katie Fitzhenry was sin binned for a high tackle - a feature of Ireland's ill-discipline throughout the game, but that seemed to spring Ireland to life, with Miller in particular, popping up all over the field spurring Ireland on.

Her charge-down helped Ireland into the Japanese half and then coming off her wing, her dummy and dive over the line got Ireland on the board. Nora Stapleton added the extras to make it 14-7.

Paula Fitzpatrick off the bench was now having a huge impact and Sene Naoupu began to put in some trademark hits through the middle as Ireland looked to up the tempo.

Naoupu's break brought Ireland to within 10 metres and from a lineout, Ireland's catch and drive was perfect and Fitzpatrick was on hand to dive over to level the scores with Stapleton's kick.

It was tense enough from there on in, though Stapleton's penalty on 73 minutes finally put Ireland ahead, and the hosts rounded it off with another Fitzpatrick try in the dying plays.

There will be plenty of concerns for Ireland going into the French game - notably their set piece struggles given how strong the French are there, and there is plenty of work to do in the coming days.

And huge credit to Japan - they came to play quick rugby and did so and thanks to a huge effort up front, especially by Makoto Ebuchi who had Ireland under massive pressure at the scrum, and they have enhanced their reputation here after a poor first game.

France gave us an exhibition of wonderful handling and support play, backed up with solid physicality that the internationally inexperienced Australian team had no answer to.

France gained the early break, an Australian handling error gave up possession in their own half, and after some good work by the whole team a great cross field kick found Izar on her own for the first try after seven minutes.

Izar then doubled the lead on 15 minutes with a moment of genius, trapping an attempted kick ahead, catching the ball, and running in from 30m out.

After that, France started to put together a level of performance not seen since the first half at Twickenham this year. The handling, lines and sheer physicality was a joy to watch. Izar completed her hat-trick on 25 minutes, Forlani added a fourth from a quick penalty, and then Pelle a fifth in the opposite corner from Izar. 29-0 at halftime, and Australia looked dazed.

Pelle added a second try early in the second half – a French maul sucking in too many defenders to stop her going in at the corner.

Australia started to take the game to France more as the bench came into action, but to no avail and in the 60th minute Romane Menager swept through most of the Australian team in a 60m curving run to take France past 40 points, closely followed by a typical maul from a 5m lineout, with Mignot touching down.

After that, with an exchange of yellow cards, the game came to a conclusion. A big win for France, showing what they are capable of. The question is whether they can do it again against Ireland, and then again in the semi-finals.