Pool A: Contrasting wins for Canada and Ferns

New Zealand record one of the highest World Cup wins ever, while Caada struggled to find their form against Wales 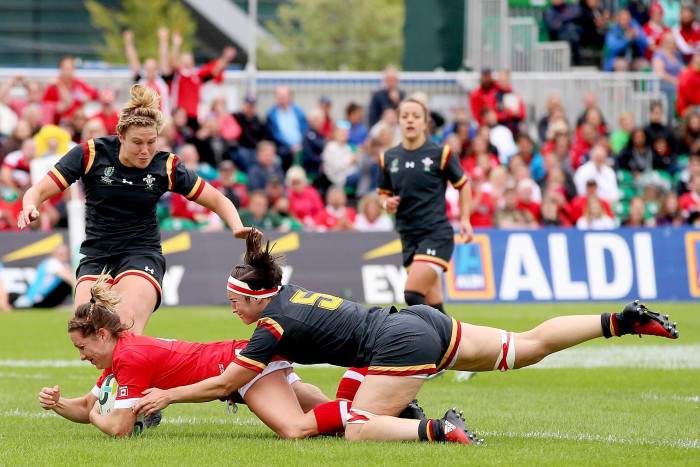 New Zealand took just 50 seconds to get on the scoreboard, the first of nine first half tries. Yet it was not a total walkover by any means, some brave defence frustrated New Zealand on several occasions, but again and again the experience, skills and sheer physical size of the Ferns were too much for Hong Kong to be able to hold out for long.

A key example was after 12 minutes when some great defence by Jessica Ho forced Woodman to knock-on when over the line, but from the resulting Hong Kong scrum the power of the Ferns pack was such that it was they who drove forward, with Cocksedge getting the touchdown.

Cocksedge also re-found the kicking boots that had been notably absent against Wales, converting seven of the nine tries before halftime.

The second half began much the same, except that the first try took less than 30 seconds, but midway through the half Hong Kong put together some of their best play of the tournament, holding the Ferns out for 12 minutes, with Natasha Olson-Throne and Ka-Yan Chong in particular having some great attacking runs into the Ferns half.

But the Ferns were finished, and as Hong Kong began to tire - and the Ferns replacements gel in - New Zealand took charge again, with Portia Woodman in particular taking charge with three tries in the last ten minutes, and eight tries overall, as the Ferns swept past a century to end with a 19-try 121-0 win – equal to the second highest World Cup score ever.

A poor start by Canada, full of largely unforced handling errors, resulted in some very even opening exchanges with the game played mainly at the Welsh end but with Canada unable to take advantage.

Wales had most of the early opportunities, but a breakaway by Karen Paquin put Canada onto the front foot, before after a good Canadian scrum saw Laura Russell put in Lori Josephson for the first score after 25 minutes.

That was the only score in a scrappy first half with both teams building bases from where an attack could be launched, only to lose the opportunity, often through self-inflicted mistakes. Some 16 unforced handling errors were recorded in the opening 40 minutes, 10 for Canada.

A change of scrumhalf for Canada initially looked like resulting in significant change of pace. Within two minute they were on the Welsh line, under the posts – but Wales survived, and the for a 10 minute period put played in the Canadian half, but without seriously threatening the line.

Canada returned the attack, but more heroic Welsh defence kept them out time and again until Canada decided to take a penalty with 12 minutes to go, Harvey on target. 10-0.

Wales battled on, but an exchange of yellow cards took the heat out of the game. Harvey herself ended the game with a try in the corner and the 2014 finalists survived a difficult game.