Pool A: Ferns into semis 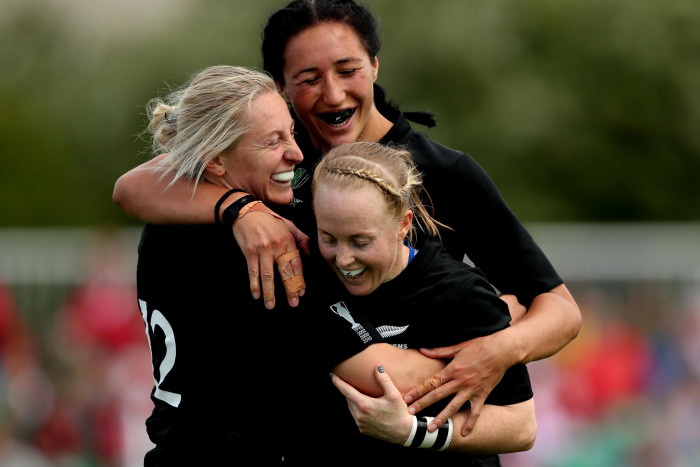 After a promising opening few minutes for Canada, a break by Portia Woodman put in Selica Winiata, after which it was all New Zealand. Some impressive Canadian defence initially held the Ferns out, but the power of the Ferns pack was irresistible, and after initially being held up for one score, prop Alodora Itunu scored two quick tries to put New Zealand 19-0 up midway through the first half.

However, minutes later Itunu was shown a yellow card, at last giving Canada a chance to strike back. But it was New Zealand who raised the pace, and some great work by Blackwell and Smith for New Zealand put in Stacey Waaka who twisted and turned for a fourth Ferns try.

Back to 15 players again the Ferns then added a fifth try from Kelly Brazier just before halftime, and New Zealand had taken a 29-0 – despite playing into a significant breeze.

The same pattern of play continued into the second half. The dominance of the Ferns pack, the speed of the line and the pressure put on Canada forcing errors, which New Zealand punished. Canada occasionally broke in the Ferns half, but never long enough to provide a serious base before New Zealand overturned them and were back on the attack.

Twelve minutes into the second half, Fiao'o Fa'amausili – playing her 50th cap – extended the lead to 36-0 after some more great play by the Ferns pack. Ten minutes later Canada – taking advantage of another Ferns yellow card, this time for Blackwell for a dangerous tackle - finally got onto the scoreboard, a great team move finally finding a gap in the New Zealand line leading to a try for Jacey Grusnick.

But again being down to 14 players was no barrier to New Zealand who added two more tries while being a player down, first from Wickliffe after some great work by Subritzky-Nafatali, and then from Itunu completing her hat-trick after Fitzpatrick had nearly danced over.

That was the final score of the game – though Wickliffe nearly added another try from the final play.

The result was Canada’s worst defeat since they lost 66-7 to New Zealand in the 2006 World Cup.

This was a match that certainly did not go to script. A big Welsh win was expected – but it didn’t quite go that way.

From the beginning, it was an even game, but after 15 minutes Wales opened the scoring with a try from Shona Powell-Hughes as the Welsh used the extra power of their pack to drive over the line.

But six minutes later came the moment all neutrals had been waiting for when they were awarded a penalty which Adrienne Garvey converted for their first World Cup points.

Then – sensation! Natasha Olson-Throne spun away from the Welsh defenders and races away for a try and Hong Kong were 10-5 ahead!

It was a lead that lasted only three minutes. A perfect cross-kick from Elinor Snowsill was caught by Jess Kavanagh-Williams and, with the conversion, Wales were back ahead 12-10. Another well time kick put in Jasmine Joyce, giving Wales and 17-10 lead at the break.

But Hong Kong were by no means finished. Wing Chong Ka Young had impressed against New Zealand, and now she seized the ball from a scrum near the Welsh line and Hong Kong were back to within two points.

Kavanagh-Williams soon extended the Welsh lead, however, and as the game entered the final quarter it was the Asian team that began to tire most. Tries from Carys Phillips and finally a brace from Sioned Harries closed out the game, Wales winning comfortably in the end 39-15.

But Hong Kong had shown why they deserved to be at the World Cup, and how much they have learnt already – with two games still to come.