Portugal back after 26 years with a win

Portugal returned to test rugby today – after 26 years away – and did so with a win. 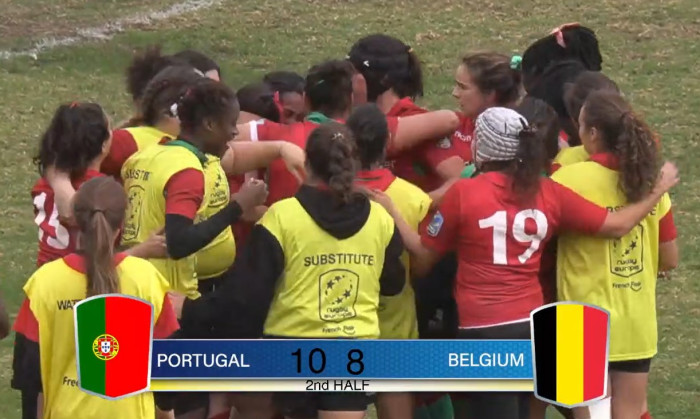 Sara Moreira restarted Portugal’s test career today when she kicked off their first test match since 1995 (when they lost 50-0 to Germany in Heidelburg). Today they were at home, and the outcome was more positive.

They were taking on Belgium, who were also returning to test rugby after a break, in their case just three years, with their previous test also being (co-incidentally) a defeat to Germany.

The game took place in the “European Trophy Pool B” – a means by which games involving teams new or returning to test rugby can be played under the banner of Rugby Europe, rather than an actual competition.

Belgium had the stronger and more organised pack, but Portugal balanced this with fast backs and superior handling and support play.

Despite this Belgium were first on the scoreboard with a penalty from Jeam Marquegnies after a fairly even first 14 minutes.

Six minutes later saw Belgium survive a period of pressure from Portugal when Marta Magalhaes was held up having crossed the line.

Portugal continued to dominate most of the possession and territory. After 32 minutes they were awarded a penalty in front of the posts and turned the points down in order to go for the try -  risk that paid off a minute later when a cross-field kick from captain Vera Simoes was down by wing Antonia Martins and centre Mariana Marques, with Martins getting to the ball to score Portugal’s first test points.

As a result Portugal went into the break 5-3 ahead.

Early in the second half an astonishing piece of skill by Marques - stopping and trapping a loose pass with her foot, then flicking the ball into her hands – allowed her to take advantage of an overlap. From the resulting ruck Adelina Costa broke away and crashed through to score Portugal’s second try. Portugal lead by 10-3.

But Belgium fought back, scoring a try on 57 minutes, but missing the conversion, although Portugal’s Sara Fernandes was shown a yellow card leading up to the try.

Portugal survived being a player down comfortably, another impressive run by Marques almost resulting in a third try, Goncalves just tackled before the line.

Once back to fifteen Portugal dominated possession for most of the rest of the game, with was mainly played at the Belgian end.