Week four of the Super W saw Queensland wrap up their place in the final after a dramatic “sudden-death” victory, while Brumbies recorded a first win. 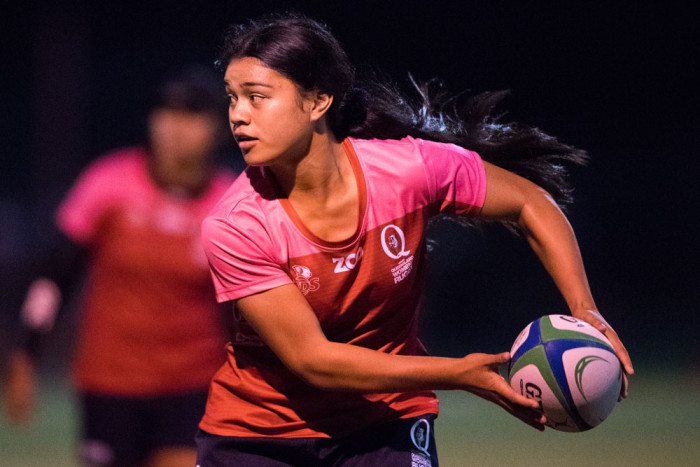 Brumbies but beat Melbourne Rebels 37-8 on a warm and sunny Good Friday afternoon. As with the previous week, Melbourne Rebels matched Brumbies for most of the first half, but Brumbies took their chances. Even so they only lead by 15-8 at half time, but ran away with the second half with four tries.

However, the weekend’s big game was on Saturday when the Queensland took on Western Force for what was effectively a sudden-death play-off for a final spot.  It was a try fest, 10 in all, with the final score snatching the win for the Reds.

The key playmakers in the win were Alysia Lefau-Fakaosilea and Sammy Treherne, who both scored a hat-trick with four of those six coming in the last 20 minutes of the game.

Queensland had a perfect start, with two tries in the first seven minutes through Lefau-Fakaosilea and Treherne, but from then it was all power to the Force loading on 13 unanswered points to the half time break, 13-10. Tui Cope lead the way for the home team with the boot, converting the single try from Waterson and then posting two penalty goals.

Within the first minute following the break, Trilleen Pomare crossed the line for the Force and Tui Cope’s kick pushed the lead out to 20-10, underlining the confidence of the home team.

Tries to Wickliffe and Fell moved the margin to 20 points and the Force looked to have all the momentum until another teen star of the Super W competition, Lefau-Fakaosilea, ran in her second for the game setting Queensland back on the right track.

Sammy Treherne then took a pass with an outstretched hand and ran a full 70 metres for her second to bring the score to 30-20.

Just three minutes later and Treherne was in again running over half the length of the field, exploiting cracks in the Force defence which were beginning to show.Lavinia Gould slotted the conversion to reduce the lead to just three points with ten minutes left on the clock.

Despite possession changing hands more than once, the ball rarely came out of the Force’s half as Queensland persisted in both attack and defence. When it looked like the Force would hold on for the win, 17 year-old Lefau-Fakaosilea, broke the opposition’s heart with a determined run up the sideline to put in the try snatching a two-point victory for her team just before the whistle for full-time was blown.

The win secures a final spot for Queensland, against NSW, the two sides looking a step above much of the rest of the competition.