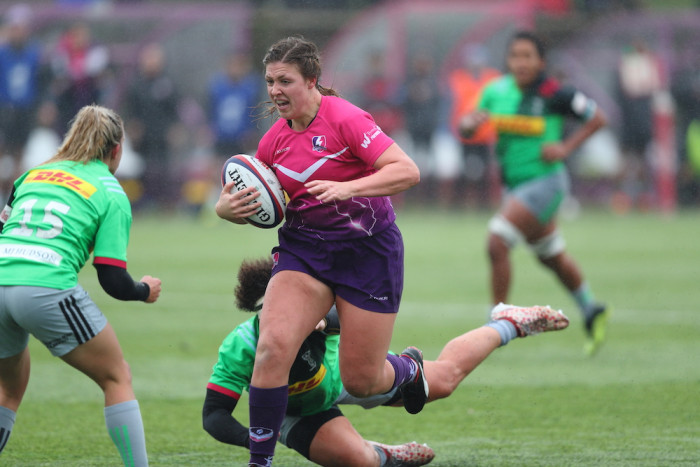 Bristol bounce back with hard-fought victory

Bristol Bears Women recorded a 26-18 bonus-point victory over Richmond Women, bouncing back from last weekend’s 47-0 defeat away at Harlequins.

Their third win of the campaign came thanks to tries from Rownita Marston, Clara Nielson, Naomi Keddie and Daisie Mayes while Richmond suffered their fifth defeat of the season.

Tricky weather conditions were the order of the afternoon but Bears proved their powerful presence in both attack and defence.

Although, Richmond were on the wrong side of the result they showed character scoring two tries in the closing stages at Shaftesbury Park.

Wasps on the rampage at Firwood Waterloo

It was a dominant performance for Wasps, who recovered from a 15-35 defeat against Loughborough Lightning, to beat Firwood Waterloo.

Last season’s semi-finalists got themselves on the scoresheet in the second minute and from there, they continued to put their foot down.

Wasps scored five tries either side of the break to seal a 62-0 victory and cement Waterloo’s afternoon misery – their second match of the campaign where they haven’t been able to get on the scoresheet.

Third place in the table was the prize for Wasps, who sit above Gloucester-Hartpury on points difference.

Back-to-back victories were the order of the day for Darlington Mowden Park Sharks as they clinched a 32-21 win over Worcester Warriors.

After beating Richmond Women last time out, Mowden began their match brightly consistently scoring points to lead 20-7 at the break.

Warriors produced a moment of magic when Jade Shekells intercepted and sprinted the length of the pitch to score but Mowden put themselves back in pole position.

Sharks secured their fourth try when prop Laura Delgado crossed for her second of the afternoon to take home the bonus point.

Table-toppers Harlequins came back from 17-0 to beat Loughborough Lightning 36-27 as they secured their sixth successive bonus-point victory of the campaign.

Karen Findlay’s players proved their Premier 15s credentials once again, as they scored all of their points in the last 50 minutes of the match to claim a hard-fought result.

Loughborough started the brighter and two tries saw them accumulate their 17-0 lead, but Quins began their comeback either side of the break with three tries and led 19-17.

Lightning continued to battle, and the two sides exchanged scores, but it was last season’s runners-up who sealed the deal with two tries in the final ten minutes to send them back to the top of the pile.

Defending champions Saracens continued their unrelenting start to the Premier 15s season with a closely contested 15-7 win over Gloucester-Hartpury.

Hannah Botterman’s try put Saracens on the board and Marlie Packer added a second but Gloucester got their only score just before the break.

A penalty in the remaining 15 minutes sealed the result for the London outfit but they drop one point behind their city rivals after not managing to pick up a bonus point.