RE Trophy starts, Portugal arrive with a bang

The Rugby Europe Trophy is back, expanded this year to five teams in a tournament that will run until next spring. 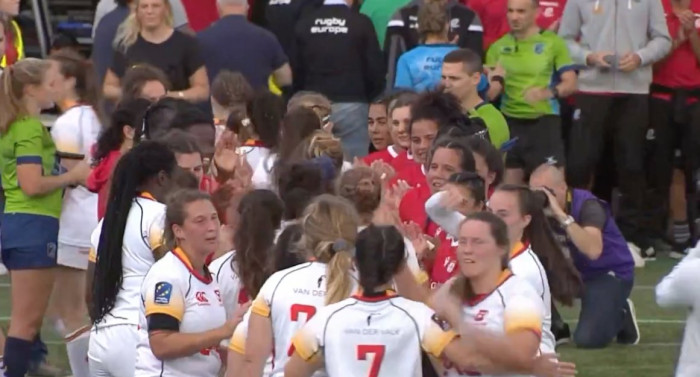 Belgium, Finland, Germany and Portugal began the battle for the 2022/23 European Trophy this weekend, with Czechia joining the fray on 5th November.

The competition opened on Saturday in Helsinki with Germany returning to competitive rugby for the first time since 2019 when they took part in the higher level Championship and finished bottom of the pool. This was therefore the first time they had played in the Trophy.

This was also Germany’s first visit to Finland, and the first game between the two teams for 14 years.

Germany began strongly, and after 21 minutes open the scoring with Lara Burger finding an overlap to score. The conversion was missed, and Germany led 5-0 and looked good.

But straight from the restart Finland too the initiative. A fumbled gather from the kick resulted a scum on the German 22, from which Heidi Hennessy burst through the German defence, and after few phases on the German line the power of Sarianna Haavisto levelled the scores with the Finns first ever try against Germany.

The game changed with that score, Finland started to use their bigger to hammer the German line and by half-time they were 17-5 ahead.

It was a tactic that we had seen from the Finns before, so it should not have been a surprise, but the Germans had little answer to it. Two more tries opened the second half after 47m and 50m. Germany dug in, but the Finns were able to round off the game with two more tries in the final ten minutes to win 43-5.

The much anticipated competition debut of Portugal produced a remarkable and unexpected result.

Last season Portugal played a couple of friendly games, badged as “European Trophy B” but effectively friendly games that heralded Portugal’s return to test rugby. The first of these in Lisbon was a pulsating encounter with Belgium which Portugal won by 10-8. This return game, in Brussels, was expected to be something similar. It wasn’t.

The match began much as the first match had been played. Portugal defended well against a wave of Belgian attacks for the first 15 minutes, before Portugal went on the offensive, with a number o  pick and go rucks being ultimately poorly defended by Belgium allowing Francisca Mendes to roll over to score the first try. This was converted and, largely against the run of play to that point, Portugal led 7-0.

Belgium were having problems defending against the Portuguese forwards and ten minutes later Neuza Reis burst through the Belgian line to add a second try, also converted the score was now 14-0 to the vistors.

Every visit to the Belgian end was coming up with points, and the immaculate kicking of captain Daniela Correia was extracting full benefit. 28 minutes saw a third try, a breakaway set up Correia to score herself under the posts for a fourth after 36m, and a fifth try nonchalantly converted from near the touchline saw Portugal in for the break at 35-0.

Belgium opened the scoring in the second half, but soon weak Belgian tackling allowed a sixth try after 50m, and then a seventh six minutes later. With Correia continuing to be faultless Portugal were 49-5 a head.

The Belgian nightmare continued with try number eight on 62m, number nine on 67m, and number 10 on 70  (Correia missing a tough, windy, touchline kicks for the latter two). 66-5. And from the final play try eleven, from Ines Spinola, ending a 71-5 win for Portugal – the second largest win in all European Trophy history, a new national record for Portugal.