France won a thrilling game against England in front of a record crowd in Grenoble, scoring in the 79th minute to secure an 18-17 win. 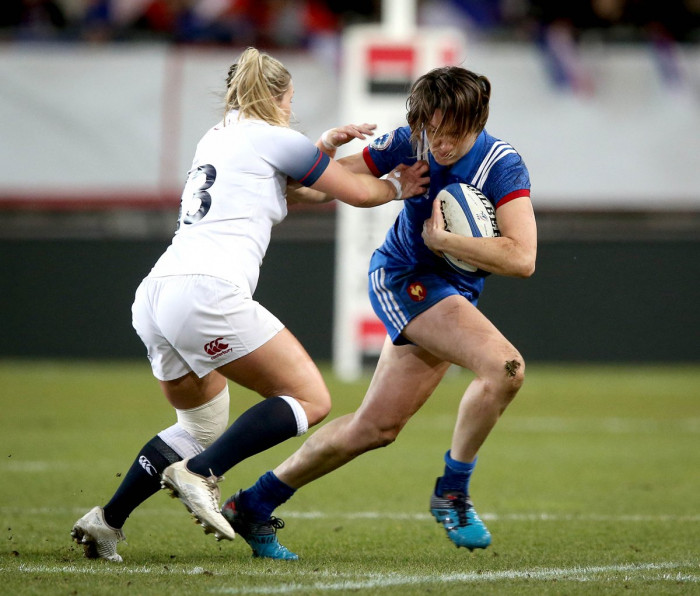 France won a thrilling game against England in front of a record crowd in Grenoble, scoring in the 79th minute to secure an 18-17 win.

The turnout of 17,440 is the biggest ever crowd for any women’s test game, including the last two World Cup Finals, and so perhaps it was fitting that the large French following were kept enthralled right to the final minute.

England drew first blood through Abigail Dow, who finished off well for the first try after Danielle Waterman had helped to create space by popping up near her opposite winger and a perfect pass from  prop Sarah Bern put the Wasps wing away.

France had much success in the tight exchanges holding England’s mauls up with a good return rate and when Rachael Burford was yellow carded on 17 minutes for a late hit, France had a great opportunity to get into the game.

The hosts though were far too inaccurate; throwing loose passes, attempting risky line outs and missing straightforward kicks to touch. They failed to capitalise on the extra player, however just after Burford was back on the field, they did get on the board.

Some neat interlinking play from Pauline Bourdon with her back row helped France to get to a metre out and when they worked the phases,  Jessy Trémoulière was on hand to burst through Charlotte Pearce to score as England’s wide defence struggled to contain the power runners.

While England had some decent darts themselves in attack, with Daley-Mclean’s boot used very well, it was France who struck again just before the break.

A brilliant steal at an England lineout from the brilliant skipper Gaëlle Hermet saw France recycle the ball patiently with some strong charges from Safi N’Diaye and the excellent Julie Duval,  and eventually Caroline Drouin powered over to give the French the halftime lead.

England went ahead again on 51 minutes with a simple score as France foolishly held back at a lineout, allowing Amy Cokayne to power through at the back of a maul.

Trémoulière reduced the arrears with a penalty a few minutes later after a dominant home scrum.

There was little between the two teams as the half wore on, as both sides rather cancelled each other out and both were guilty of loose passes and poor breakdown errors. Daley-Mclean’s footwork was a real highlight for England while Hermet continued to punch holes in the England defence with her outstanding angles and power.

Daley-Mclean made it a four point lead on 70 minutes but France came within an inch of scoring what surely would have been a match winning try when Bourdon’s cross field kick made life difficult for Ellie Kildunne.

A knock on though saved England and then seconds later Kildunne was called on for a try saving tackle into touch on Carla Niesen.

The best was yet to come for France when finally in the last minute of the match, the ball was spun wide, with Yanna Rivoalen playing a key role and who else but Trémoulière was again on hand to expose England’s wide defence and power through for the score to win it.