A record breaking 10,545 spectators, more than any international women’s rugby match in England outside of the 2010 World Cup Final, turned out to watch, at the time, undefeated England v Italy. 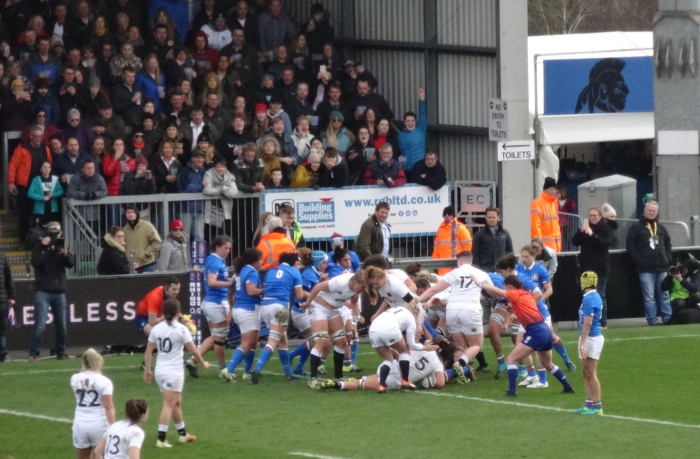 Italy started the 4th round proceedings with kick off though England quickly pushed back the visitors into their half. England chased down an Italy kick from their 22 after five minutes in and nearly scored but were brought back for a penalty.

Both teams in the first ten minutes were looking fairly even, however this duality soon ended with flying winger Jess Breach putting the final ball to ground our wide to bring England ahead. The conversion was good from the touchline from Zoe Harrison and England were 7-0 ahead

An impressive break for England at 22 minutes saw them bring the ball to the halfway line where Breach carried it nearly to the try line again but was tackled into touch by a brilliant Aura Muzzo tackle just metres short. With growing confidence, England continued to make breaks but well organised Italian continue to just about hold htem back. That defence finally broke at 34 minutes with Lark Davies carrying the ball over the line at a ruck. Katy Daley-Mclean converted bringing the score to 14-0.

England confidence continued for the rest of the half with a further try confirmed by TMO for captain Sarah Hunter after a pass back inside from Kelly Smith. Another conversion brought the game to 21-0 at half time.

England continued where they left off in the firstwith, one minute in to the second half a fourth, and bonus point try for Sarah Bern - no conversion for Daley-Mclean this time. A fifth try shortly followed off the back of a scrum for Marlie Packer. This time Daley-Mclean sent it through the posts and England were 33 points ahead.

At the final ten minutes Italy seem to have lost a bit of their spark as an England maul found the line bringing a try for Abbie Scott, but no conversion. 48 – 0. The clock ticked on for the 80th minute but England showed no sign of stopping with a last minute try for Sarah McKenna under the posts. This one is converted leaving the final score England 55 – Italy 0.