Ireland drew a record crowd of 6,047 to Dublin on Saturday night but they were not good enough on the field to give their home support a win to take home, with France winning 17-47 in an entertaining game. 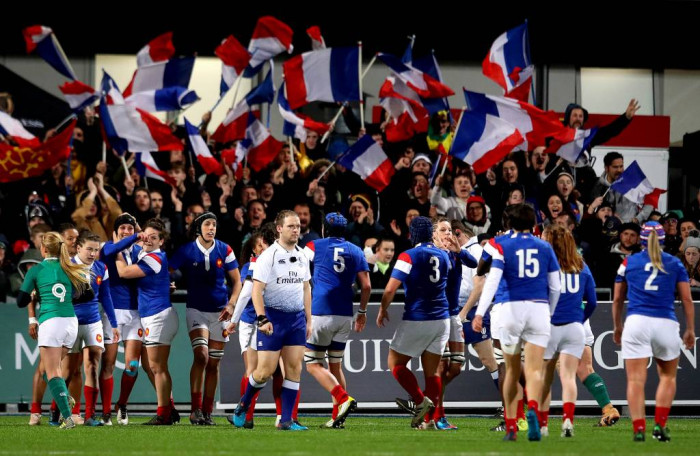 There were ten tries in this game, with Ireland more than competitive for large swathes of the match but in the end the French power up front - where Ireland struggled at set piece - and neat attacking was too much to handle, with French winger Caroline Boujard showing superb form again.

The return of Jessy Tremouliere was also a factor. The fullback didn't miss a single kick at goal and was assured despite an early knock.  Ireland kicked poorly to the World Player of the Year and were punished with Tremouliere, Boujard and Ian Jason finding acres of space in return.

Ireland started poorly when they lost Nichola Fryday to a very early sinbinning and France scored immediately through hooker  Caroline Thomas after a trademark driving lineout.

Rattled but showing a good reply, Ireland broke into the French half through a strong run from Alison Miller and then a powerful burst from captain Ciara Griffin saw Ireland get over the try line.

France responded with a superb score. A Kathryn Dane box-kick, allowed Boujard to break clean through midfield and despite Eimear Considine and Lauren Delany scrambling back to bring her down, her offload freed up fellow winger Ian Jason to finish off near the left corner. The end to end nature of the game carried on and it was Claire Molloy, who started like a train, diving over after some patient drives from the Irish pack.

But France showed their class when a burst from the excellent Audrey Forlani helping bring a score for prop Lise Arricastre and then Yanna Rivoalen's kick over the top was grabbed by Boujard who could not be caught by the chasing Miller and Fowley.

France upped their accuracy and intensity, a rip on Delany by Yolaine Yengo and deft hands from Rivoalen paving the way for abrasive number 8 Romane Menager to power over for her try.

Menager was then red carded for a forearm to the neck and though Ireland pushed to try and get back into it and scored a superb try for Sene Naoupu it was too little too late with France 35-17 clear at that stage.

They made sure to finish with a flourish, Forlani going over in the 71st minute and replacement Marine Menager joined her twin sister on the scoresheet when released for the right corner by skipper Gaelle Hermet and Coumba Diallo.