Records tumble for France in Corsica 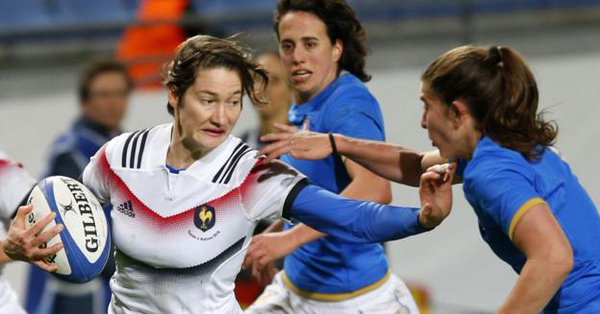 The Italians barely got out of their half in the opening 40 minutes.

Faced with wave upon wave of white French shirts all the Azzurri could do was defend and live off a few scraps. Their pack was going back at a rate of knots in most scrums, and that is what lead to the first try from Cyrielle Banet - Italy losing the ball against the head and France taking full advantage of a disordered backline to score. The only problem was that the knock Banet took in scoring would limit her participation in most of the rest of the game

France mixed that power with pace and exquisite handling and support play, and the tries kept coming. Banet added a second try on 14 minutes but went off soon afterwards with the shoulder injury.

To rub salt into the wound Jessy Tremouliere was in magnificent form with the boot, missing only one kick all evening. The 14-0 lead became 17-0 when France slightly oddly  decided to kick a penalty after 24 mins, Tremouliere added a try of her own next – a hugely powerful run – before Marine Menager, on early for Banet, scored the bonus point try after just 35 minues.

A perfect French maul just before the break meant France were 38-0 ahead at halftime.

As with the opening game, however, France took a while to get going in the second half, and Italy had their chances to score in France for the first time since 2010 – but France showed they can defend as well as attack, and there was no way through.

But this meant that we were well into the final 10 minutes before France could add to their score. Audrey Forlani looked like she had been put in by some neat handwork by Yanna Rivoalen, but the pass was forward – but a minute later it was Forlani unloading to Rivoalen and France were up to 45-0.

Marine Manager then took the score to 50-0 following another scrum won against the head before Pauline Bourdon ended proceedings, Tremouliere converting to end as a 57-0 win for France, a result that was….

France v England in Grenoble in two week’s time promises to be unmissable!