Ahead of the final games of the women's Super Series we spoke to England's Amber Reed, who won her 50th cap against USA, who says New Zealand don't hold any fear for England. 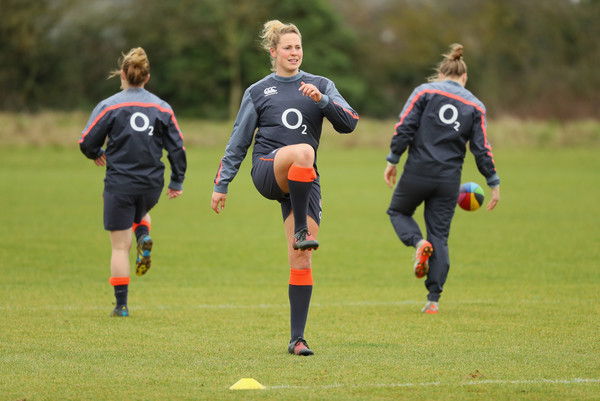 England are three points ahead of the Black Ferns in the table going into the final round with the match being played at the 6,000 capacity Torreo Stadium in San Diego.

It's the first time the two sides have met since the 2017 Women’s Rugby World Cup final in Belfast.  For Reed, who is named as a replacement, being involved at all is a huge achievement with injury threatening her ability to get back in an England shirt.

"It has been a very difficult year for me with injury so to be here, surrounded by this squad, winning my 50th cap last week and playing for England is massive.

"Back in October I was getting lots of medical advice and opinion and the question was would I play again? The progress has been slow and it's been hard work but being here now feels very good."

After such a long time out, Reed says her body has reacted well to the tough nature of back to back to test matches.

"So far my body feels good - there's the usual soreness of playing high quality matches but other than that fine. The games here have been very physical and nothing has come easy so everyone is feeling that."

Although England have won three games from three, each match has brought significant challenges and the wins over France and Canada required diligent comebacks late on.

Reed assesses the performances so far.

"As a team we were disappointed with our USA performance. The scoreline looked better than we performed but we didn't follow through on our processes and we knew we would have to get better given the calibre of teams to come.

"We were pleased with the Canada win - they are a very good side and really put us under pressure defensively but we were strong in the second half and that happened against France as well. We had a very frank team talk from Simon Middleton at half time but we knew we had the game plan to win that match and we needed to execute the basics a lot better and we did enough.

"These are all obviously very hard games against very good teams."

At 18-5 down against France at halftime, who do England turn to for inspiration?

"We've got a strong leadership group here and there are four or five players in situations like that they can step up. Sarah Hunter is always key obviously as captain and with her experience and players like Abbie Scott too have stepped up a lot.

"This tournament is also about enabling us to build depth through the squad. Players like Zoe Harrison getting lots of time will be great in the long run for us. I haven't played alongside her much before and I have really enjoyed it - she's growing in confidence and experience."

England are looking for a more complete performance against New Zealand and Reed says they approach the game with respect but no fear.

"They've got some great ball carriers and a lot of pace and steppers through the backs so we are going to have to get on the front foot early in this game. I've played New Zealand plenty of times now and we've actually won most of those matches. Yes because it's New Zealand there's always an air about them and respect them a lot but we don't fear what they have to offer. "

There has been criticism about the facilities for the games at the tournament but Reed swiftly sidesteps the issue, pointing to the importance of having big games at this time in the World Cup cycle.

"I know it is being talked about in the media but for the players the most important thing is getting to play the games and getting top quality opposition. We don't get tested like this outside of World Cup years in formats like this often and this is definitely the best summer tour I have been part of. It's a step in the right direction."

After the tournament, Reed is looking forward to going into her 11th season with Bristol Bears in England's top league.

"At the end of every season with Bristol I say that was my favourite season. The club is in a good place and moving into the right direction. Having Kim Oliver come in to drive things as coach, who is Bristol
through and through ,and the investment going into the league from the RFU means it's an exciting place to be."