Richmond close in on English title

Richmond are one game away from winning this year's English Premiership title after the final round of games for most teams at the weekend. 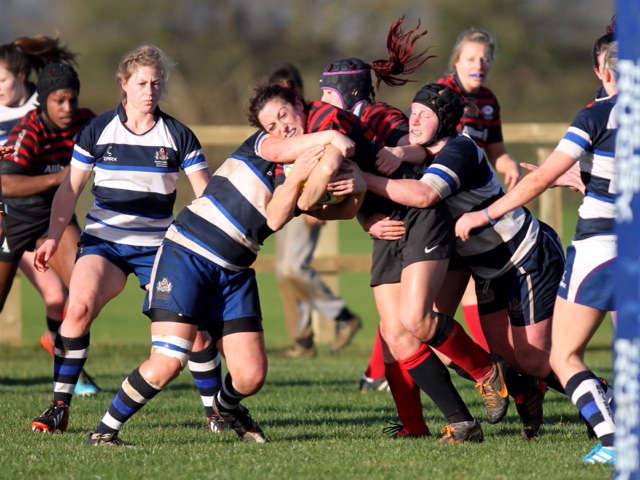 Richmond's refixed game with Bristol will go ahead on Wednesday night and a win, given their points difference, will be enough for them to pip Saracens (pictured) to the title.  Image thanks to Rugby Matters

After a delay of more than two hours due to travel problems, the two teams took the field ready for another display of the fast rugby they both favour. DMP started strongly, denying Richmond any possession and, as one spectator remarked, had to remove the kitchen sink from the pitch after throwing everything at the Richmond line.

They were duly rewarded with a try in the far corner from Scotland's Katy Green. Katy McLean failed to convert but DMP held a deserved lead. 0-5.

Richmond hit back straight away with a try from speedy winger Tash Brennan and the score stayed at 5-5 until just before halftime when flanker Rowena Burnfield was found hanging out on the wing. She raced over for her 2nd try in as many games to give Richmond a 10-5 lead at halftime.

DMP started the 2nd half strongly but a scrum on their line showed the difference between the packs with Richmond awarded a penalty try after several infringements by DMP, who had lost tight head prop Sally Austen to the sin bin right before half time. Abi Chamberlain converted. 17-5.

This time it was DMP's chance to hit straight back when flanker Ruth Nash chipped a perfect little kick over the home defence to allow Katy Green to score after Richmond failed to scramble to the ball first. 17-10.

From this point on, the greater fitness of Richmond started to show with hooker Emma Croker, prop Ellisha Dee and No. 8 Becky Essex all scoring, the last converted by Chamberlain. 34-10.

Player of the match Brennan had the final say after some slick linkup play between back rows Sam McCarthy and Hannah Field gave her a clear run to the line.

Victory leaves Richmond needing a win on Wednesday against Bristol to secure the title.

Playing on a 3G surface, a fast game was anticipated in this clash and the Worcester team took full advantage of this, with the backs prominent throughout.

Lisa Campbell crossed the line in the opening minute, following a powerful line burst. Megan Goddard, who had a fine game at 10, took the extras and four minutes later, Lydia Thompson and Steph Johnston combined well on the left wing for Thompson to eventually outpace the visitors defence.

This set the scene for the game and although the Bulls battled willingly in midfield, and missed a scoring opportunity with a penalty in front of the posts, they only really threatened the Worcester line in the dying minutes of the game.

Their plight was not helped when former England captain, Catherine Spencer, left the field after 30 minutes with an injury. Perhaps there sterling  efforts and never say die attitude, playing the final 10 minutes with only 14 players due to injury, deserved a score.

There were many moments of thrilling rugby from the home side, some excellent lines run by Lauren Chenoweth, the interchanges between Thompson, Johnston and Sam Bree, and latterly replacement Sophie Watkiss, but perhaps the most memorable being the introduction of Heather Fisher, playing her first game of the season following serious injury. Fisher crashed through the Bulls midfield, then outpaced the back line to score within four minutes of being introduced, and went on to record a hat trick.

This game began with England star Emily Scarratt, stamping her mark and showing Lichfield’s intentions with a converted try early on in the opening ten minutes, which she converted.

The game then stalled somewhat with both Lichfield and Wasps having some good phases of play, and lovely ball retention, but neither side seemed able to finish and score the all-important points, due to good defence and unforced errors. In the 20th minute when Scarratt was able to capitalise on some well-executed handling from the Lichfield backs.

Scarratt took the final pass and demonstrated her blistering pace by running round the Wasps winger and full back to once again cross the line.

No sooner had Lichfield received the ball from kick off were they back in the Wasps 22 putting pressure on Wasps’ defence. In the 23rd minute Lichfield reaped the benefits with Sarah Hunter scoring after more well executed handling, this time Scarratt converted the points making the score 19-0.

Both teams showed real determination and grit, but once again it was Lichfield who benefited, with the irrepressible Scarratt showing true finishing ability and crossing the white wash for her third and final try; before she was substituted at half time.

A second half deadlock, where Wasps enjoyed early possession, was broken by Lichfield in the 58th minute, by a storming run from Victoria Fleetwood with a lovely offload to Vicki Jackson who ran in from 10 meters to score the try.

The next try was scored by Harriet Millar-Mills. Wasp did not give up and showed true fighting spirit, withholding strong possession in the Lichfield half and were rewarded with a penalty which they kicked to touch for a lineout 10 meters from Lichfield’s try line.

Wasps looked poised to score, however a poorly executed lineout saw Millar-Mills steal the ball, and make a run up the touch line into Wasp’s own 22. Lichfield kept possession for a few phase but looked unable to capitalise, until a lovely dummy pass from Natasha Jones saw her break the Wasps defensive line, allowing her to make a well timed off-load to Millar-Mills; who ensured the bonus point.

Despite the bonus point, Saracens could do little to affect their chances on this season’s title with Richmond doing a similar job in their penultimate game. Saracens season is now over and they must rely now on a Bristol win over Richmond to lift the title, but the north London side will be pleased to have ended their season on a positive note and surely satisfied too with a much improved season where they led from the front.

The returning Maggie Alphonsi has had a hugely positive impact this season at Saracens, and her two tries in this game helped her team to a positive win. Saracens raced into an early lead , scoring from good ball carries from the break-down. Saracens were able to use this momentum and score twice more before half time also capitalising on the yellow Bristol yellow card of Sasha Acheson – Leanne Riley and Leigh Dargan on the score-sheet.

Bristol started the first half off with some strong ball carries and getting the ball out to a strong Mid field with Amy Wilson Hardy and Kay Wilson looking to break the Saracens defence. This never happened and Saracens where able to close out the game with 2 more tries late on in the second half, with Lindsay Wheeler also dotting down.