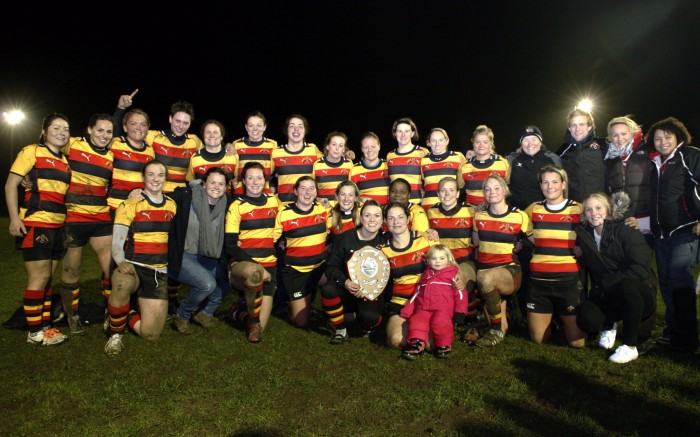 Image thanks to Rugby Matters

Bristol, who have had a very positive season, ending up third,  struggled to get their normal first team out for the midweek fixture whereas Richmond were only missing Claire Allan from Sunday's victory over DMP Sharks. The gulf in standard was quickly apparent, with the Richmond scrum marching Bristol's backwards at every opportunity.

In a 13-try exhibition, England number 8 Becky Essex and centre Jo Watmore both scored hat tricks, with tighthead prop Ellisha Dee adding another two to her impressive tally this season on the way to a 75-0 victory.

Richmond had looked strong since the first week of the season and had been top of the table after week two when they managed a 26-12 win over last season's champions Worcester. However they fell to a 23-9 loss to Saracens in October and had been chasing them ever since.

The critical moment came before Christmas when they reversed the Saracens result but couldn't take top stop due to the cancelled Bristol match from the week before. Richmond knew what they had to do, win all three remaining games with at least two try bonus points. With their fate in their hands, Richmond's victory never looked in doubt and impressive wins over Wasps, DMP and Bristol in January sealed their victory.

Head coach Karen Findlay praised the squad for their team work after the match and will be rightly proud of developing through so many players from the second team this season as several of the bigger names turn their attention to the World Cup in August.

The unusually early end to the Premiership allows the international players to now focus on the 6 Nations.