We spoke to the Richmond head coach Karen Findlay ahead of this weekend's English Premiership Final where her side will take on Saracens.  The two leading sides in the English club game will play on Sunday 17th at the Twickenham Stoop at 5.30pm. 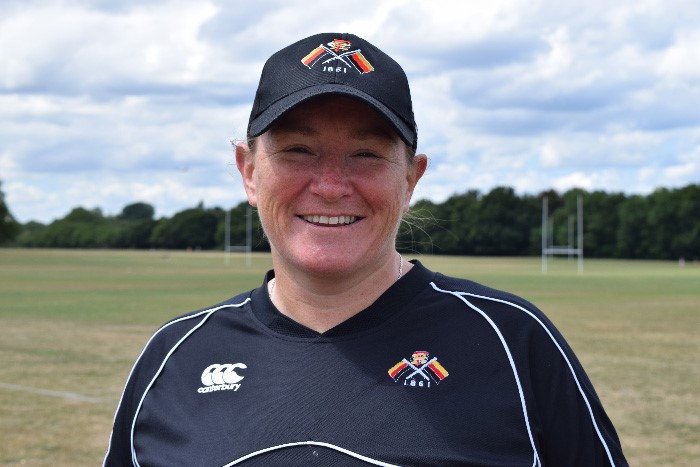 Congrats on reaching the league final. Tell us a bit about your progression this season and how you've reached this point? There has been a lot of work on and off the field by players, coaching staff and management support and the club in general to ensure we have achieved our potential as a side.  It has not been easy and often a big challenge.  For starters, we have had to manage the impact of abstraction of players involved with the professional women’s sevens programme. It’s fantastic for the women’s  game as a whole and raising the profile, especially now qualification for the Olympics  in Rio has been achieved – it’s an amazing opportunity for the players  involved. But for us that meant nine of our 1st team squad were unavailable over the  past 12 months, with now six of those players being full time professionals and removed from club availability.

So that took a significant rebuild but has given other players the opportunity to step up and they have done a great job.  That, coupled with the club doing a fantastic recruitment job over the summer, has enabled us to strengthen the top end of the club, whilst also bolstering our 2nd team who will be playing in a big game this Sunday to hopefully win the Southern Championship. We have also been able to develop a genuine third team squad with a lot of new faces.

The 1st XV squad have worked exceptionally hard this season on being a real cohesive unit, and we've pushed that ‘whole team’ ethos as the centre of everything we do.

Selection is competitive and players have had to work hard, training at intensity to push themselves and their peers to achieve being selected consistently.  We've taken each game as it has come and not got ahead of ourselves. We have had to dig ourselves out of a few holes on the way! With the standard of competition that the premiership creates, no game has been easy. There is fierce competition and rivalry through international peers playing against one other and good club players stating their cases.  We kept an unbeaten clean record across the season bar our one home game against Saracens, so we are definitely looking forward to the final.

As one of England's most successful clubs, tell us what sort of planning goes on to ensure you keep up that consistency? It’s a full time job - on top of the day job!  It’s about having the plan to ensure there is a strong playing side with a strong executive side at the club. It’s important to make sure we have the infrastructure to support what our players need - coaches and volunteers who are in it for the right reasons, who only want to create the best environment on and off the field for our players.  We set a high bar for success and maintaining that, for example having a proper SNC coach, video analyst and medical team, are all essential as they support the coaching staff.

Creating a competitive training environment, which drives selection is also key.  With so many national players in the squad we ensure we are well linked in with the national coaching teams that share the management and welfare of individual players so we can plan or support shared development needs from both perspectives.

But in all of that is the values underpinning it all - its not about who you are as a player or whether you happen to be the best in the country, it’s about buying into the club and the team and letting your performance do the talking.

To be honest - it takes endless planning on various fronts to get recruitment right, not just for one but three teams, to ensure we have a strong player pathway at the club and are pushing individual development.  And with that, its key to be part of a club, not just a stand-alone women’s section, and that is very much the case at Richmond.  We have great support from the club and our main sponsors Arthur J. Gallagher & Co in terms of both financial support and access to facilities.

You came comfortably through your semi final - what was your assessment of the match? I wouldn’t say ‘comfortably’! Worcester are a well drilled side that want to move the ball and are they a challenge to deal with at the point of contact.  I knew that defensively they would play to the 80th minute.  They thoroughly deserved their place in the top four. At half time there was a 8-0 breathing space but we were making too many unforced errors.  At half time we managed to identify the key aspects we needed to put right, such as patience and accuracy in our execution, moving the point of contact and above all playing at a tempo that reflected the players fitness levels.  When we did that we started to create space and finished the job off. Our speed of reaction to the ball carrier in our support lines was significantly better and that was complimented with some moments of individual brilliance.  That’s what resulted in getting four tries to bolster the win to 35-0.

There's lots of experience in your side, but also young talent, who are the Richmond players to watch in the years ahead? The blend of experience and new faces has worked well for us. The back division has got the benefit of some experienced heads, but Holly Myers whose played on our wing and at outside centre has had a good season, which was reflected in her successful selection for the England Autumn test series against the Maple Leaves.

She has very much made her mark this season through how she has played and has really applied herself to improving her game.  Leanne Riley at scrum half has been a great addition to the club and she has a lot of seasons ahead of her now she’s turned her focus back on 15s.  As far as the pack goes, its really difficult to highlight individuals as its such a cohesive unit but Fiona Fletcher at back row has made a significant step up and shown a great work ethic to improve and develop. Likewise, Zoe Saynor in the second row and Elisha Dee more recently at prop have made their mark.  But Vickki Cornborough has really lifted her game. She is still young in terms of international futures, but has played like a machine and reads the game in front of her well for the style of rugby we want to play.

Without the England 7s players this season, have you noticed any difference in the standard of the Premiership?Had you asked me that 12 months ago having just experienced the impact of professional sevens contract implications, and as a result not have players available, then my answer would have probably been of course the standard will suffer a setback. I don’t think it’s honest to suggest those involved in whatever capacity with the women's premiership don’t want their top club players not to be involved. The Women’s Premiership Group (WPG) have worked extremely hard to get across the point that in spreading the gospel and increasing the profile of women’s rugby, getting young players into the game wanting to aspire to being the Emily Scarratt's of this world as an example, the games need to be broadcast and the domestic game properly financially supported and sponsored.  To get that you have to have the best product being seen - to get that you need the standard to be at it’s highest.  When you now see the women’s football domestic fixtures on TV post their World Cup success, you see the top women’s football players in the game playing, and we need that in women's rugby.

But the evolution of sevens alongside the desire to have as strong a 15s programme has not been easy, the size of player pool at the top end of the women's game necessary to support both sevens and 15s aspirations in such a short timeframe just wasn’t there. I think both the clubs and national England coaching team have had to manage that as best they can until the subsequent development of players (through a strong pathway which I believe needs to include a close partnership with the premiership clubs) has developed and is at the level needed to ensure standards for both camps aren’t compromised.

You know Saracens well by this stage - what sort of game are you expecting this weekend? There is a history of strong rivalry between both clubs. It’s always a good, hard, close, extremely physical game and we don’t anticipate it being anything different on Sunday.  We've played one another enough to get a general sense of how each other play, but that doesn’t mean you take anything as a given.  What I do know is that the two clubs who finished in the top two slots of the premiership have successfully won their respective semi finals, and are now in the final, and that seems to me to be deserving and fair, and reflective of the performance of both clubs across the season.  It’s a fantastic opportunity for the women's game and a great way for the players involved to showcase themselves and just how good women's rugby as a sport is.

Does it being on TV add any extra motivation for the girls?Without a doubt! It's a massive first for the game as a whole, something everyone involved with the WPG has pushed hard for over the past 12 months from all of the eight premiership clubs working with the RFU to have the women's premiership deservedly showcased.  It’s the rightful and proud platform for all of the individual players involved on Sunday who make the game what it is and who committedly play every weekend whilst managing the demands of full time jobs, family needs, their studies, alongside the demands of their training regimes to be seen upon.  Onwards and upwards!

See here for ticket details for this weekend's game