Last year's top two sides, Richmond and Saracens are setting the early pace in the English Women's Premiership with both making it two from two at the weekend. 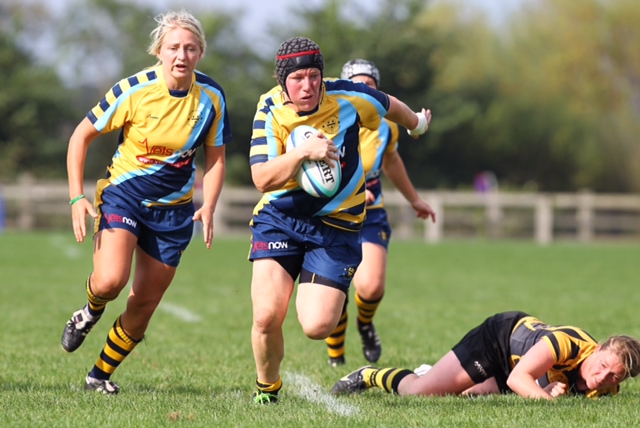 Elsewhere Wasps secured an excellent win away at Worcester while Lichfield picked up a comfortable win against Alyesford Bulls.

Richmond sit top of the table (which you can see here) thanks to two bonus points in their opening matches.

Worcester took the game straight to Wasps and after only 8 minutes, Sam Bree’s pace took her past the Wasps defence over the whitewash for the first try of the game. Megan Goddard converted to give Worcester a 7-0 lead.

Wasps followed this up with a try from Jane Leonard converted by Hannah Edwards, to take the score to 7-7.

Keeping up the fight, Rochelle Clark & Zoe Bennion gained important territory allowing Ceri Large to break through to score her first try of the season. Goddard added the extras.

During the half, Worcester were left disappointed when a well worked try was deemed held up and disallowed.

The whistle blew for half time with the scores at 14-7.

The second half kicked off and Wasps immediately looked like a different team to that of the first half and put the pressure on, forcing a penalty just four minutes in. Wasps chose to kick for the posts, which was successfully kicked for three points by Hannah Edwards, leaving them just four points adrift.

Wasps kept the hosts in their own half but solid tackles, notably from Kelly Smith kept them at bay until carries from Lisa Campbell & Courtney Gill made progress to allow Worcester clear the danger. Despite the promising carries, the visitors forced another penalty which was again slotted between the posts for three points by Edwards, leaving them just one point away from levelling up the scores.

Wasps continued to pressure and drove just meters short of the try line. Worcester defended well, until the whistle blew for a yellow card offence to Sam Bree for being off her feet.

Worcester struggled to maintain their defence and Wasps and England prop, Clare Purdy crossed the line for a try which was converted to take the visitors ahead for the first time in the game.

Not settling at 14-20, Wasps battled very well for a second try which came just three minutes later via Liz Riley and this was converted drawing the match to a close and finishing at 14-27 to the visitors.

Following a period of even pressure, the deadlock was finally broken by a penalty from Katy McLean on 12 minutes to give the home side the lead.

Richmond soon struck back when England wing Jo Watmore broke through the Shark's defence for a touch-down under the posts, which was converted.

On the 30 minute mark, a line-out inside the Shark's 22 resulted in  Richmond’s backs getting quick ball out to Watmore  again who ran in a try corner.

On the stroke of half time, Richmond were awarded a penalty try when the Sharks were judged to have infringed the drive forward on their try line, and the convertion from Alice Richardson made it 3-19 at the break.

With the start of the second half, Richmond continued where they had left off with Watmore again popping up with a strong run resulting in a touch-down, despite a valiant tackle attempt from Shark's winger Julie Hope - Richardson added  the 2 points.

Sharks continued to battle well but couldn't quite capitalise on the pressure being applied. Inevitably Richmond broke away again on 75 minutes, when good interlink play between Richardson and Watmore resulted in a try for a 30-point unassailable lead.

Straight from the kick-off, the Sharks counter attack forced a scrum inside Richmond's five metre line.  The home side's pack took control of the resulting scrum, driving over the try line for No 8 Jo Brown to dot down. McLean converted with 78 minutes on the clock.

The last move of the game saw Richmond's centre Hannah Fields running in under the post following missed tackles - Richardson having the last word with the boot, taking the final score to DMP Sharks 10 - Richmond 40.

A storming second half comeback wasn’t quite enough for Bristol, as they were beaten at home by Saracens in their first home game of the season.

In a high energy encounter, Saracens raced ahead during the first half scoring two penalties from Lauren Cattell and two tries from Maggie Alphonsi and Rachel Potter,  bringing the half time score to 0-16 to the visitors.

A yellow card to Saracens on 37 minutes gave Bristol an edge at the start of the second half, and Katie Mason demonstrated some impeccable footwork and running ability to take advantage and score a try, seeing Bristol into the game on 43 minutes.

Back to full strength, Saracens scored again through Hannah Gallagher on 60 minutes bring the score to 5 – 21, but Bristol kept on pushing. Two excellent tries from new girl Sydney Gregson on 68 minutes and 70 minutes put the home side within 7 points of victory.

After an injury reduced Saracens to 14 players, two yellow cards for Bristol gave Saracens the opportunity to add to their score, however some excellent defensive play from the Bristol team kept the visitors out.

Although the team are yet to win this season, Head Coach LJ Adams praised the performance and is looking forward to next week’s encounter with Wasps. “This is a young and relatively inexperienced team and today, especially in the second half, you really wouldn’t have known that. Our defense improved massively from last week and our scrum was as solid as ever – and once the girls got into the rhythm of the game they were fantastic.”

Lichfield secured a confident win over Aylesford at the weekend picking up their first win of the season.

The home side built the pressure early and where quickly rewarded with a line break try from flanker Amy Cokayne, three minutes into the game with the conversion from Sarah Nicholas.

Sustained pressure kept the ball in Aylesford’s end of the pitch and after some lovely interchanging off loads from the centers and winger Eve Morton went over the try line again. Six minutes later and Lichfield were back and Nicholas kicked a penalty for a 17-0 lead.

Aylesford Bulls showed guts and determination and both teams put together some lovely rugby, but at 35 minutes a runaway try lead to Jasmine Coyne sprinting across the white line for her first try of the game and Cokayne went over for another try after a well worked lineout and a lovely offload from Emily Braund for a 29-0 lead at halftime.

The unstoppable Cokayne was over the line within the first 5 minutes of the whistle and more great pressure led to Coyne running in her second try. Nicholas then grabbed another to make it 46-0.

Cokayne went over for her fourth and final try at 62 minutes by scoring in the corner after and at 70 minutes Nicholas scored the final try, her second of the game, which she was then able to convert.