England scrum-half Leanne Riley is taking nothing for granted ahead of Saturday’s match against Wales at The Stoop, as England look to continue their hunt for a second successive Women’s Six Nations Grand Slam. 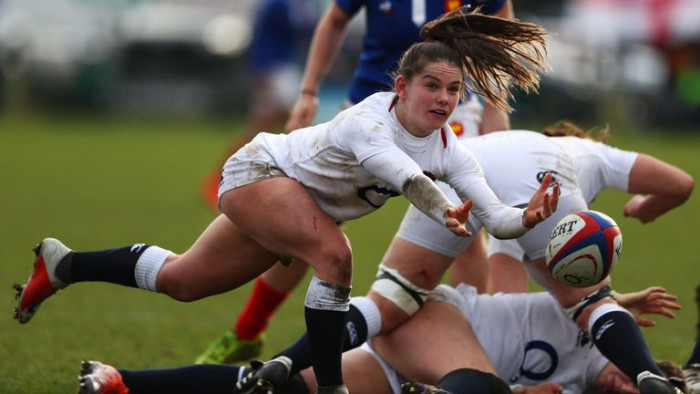 Simon Middleton’s side have won all three of their matches in this year’s Championship to date, including an opening day victory over rivals France, before shutouts against both Scotland and Ireland.

In contrast, it has been a tough campaign for Wales so far, after being narrowly defeated by Italy in Round 1, before going down to Ireland and France, leaving them still searching for their first victory of this year’s tournament.

But despite the fact Saturday’s opponents are propping up the table heading to London, Riley knows they will still take some beating come match day, with England having one eye on another unbeaten Championship.

“When we face Wales it’s always a massive physical game, I always remember coming off the pitch feeling battered and bruised against them,” the 26-year-old said.

“This time I expect nothing less, they’re going to come out firing on Saturday, they’ve got big ball carriers and when they get on the front foot, they can be hard to handle, so we just need to find a way to counteract that.

“There’s a lot of questions around how we do that, but Wales will definitely be a physical game, and if you give them the time and space to play then they can string phases together.

“The amount of line breaks they got against Ireland shows it’s going to be a big test, but hopefully if we match up physically, I hope the result will take care of itself.

“We’ve put ourselves in a really good position for that second Grand Slam, we are definitely in a good position, we’ve got two tough games left to play and we’re excited to get going with it.”

Almost 10,000 tickets have been sold for Saturday’s match already and the side could be in line for another record-breaking attendance for an English non-World Cup game, with the current record at 10,545 for last season’s clash with Italy at Exeter’s Sandy Park.

Riley is just one of a number of Harlequins players among the Red Roses ranks and knows just how much the home crowd at The Stoop can make a difference in matches such as this one.

“We love playing at The Stoop,” the scrum-half said. “Whether it’s a Harlequins player or any of the England girls, we’ve been there quite a few years and we keep coming back.

“We’re really looking forward to it, and to play in front of our home crowd, to have fans there that come and watch us for Harlequins that can then come and watch us in an England shirt, it’s a really proud moment for us.

“It’s always a massive atmosphere and the pitch is really nice to play on, so it will be good to get back out there, it’s an amazing day to be a part of, it’s a bit cliché but the crowd is the 16th player on the pitch.

“If there’s a line break or a big tackle and you hear the reaction from them that does lift us up as a team, so hopefully we’ll get a lot of that on Saturday and they’ll get behind us and we’ll have a really big crowd to lift us onto the stage.”