Round one: Talking Points

We look back on the first weekend of the Women's Rugby World Cup. 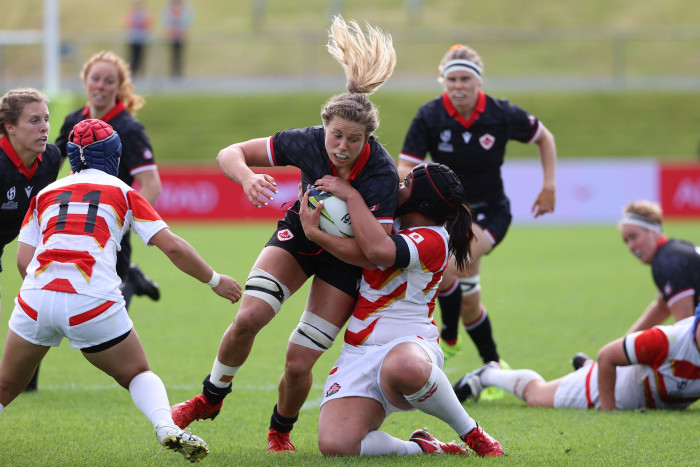 Work to do but positives for New Zealand

It seemed unthinkable, but after 20 minutes it looked like a huge upset was on the cards with the hosts leaking three tries to an inspired Australian team. The comeback was impressive but there are also questions about the Black Ferns. Was that simply a slow start, or real fragility? If Australia had not had two yellow cards and if they had converted a penalty when it was 17-17 what would have happened? One welcome headache for Wayne Smith will be determining who his top choice wings are when Ayesha Leti-I’iga – the form wing in the world going into the competition– is fit. Ruby Tui was brilliant against Australia and Portia Woodman is surely undroppable?

Did Fiji find some England weaknesses?

It’s bizarre to talk about weaknesses when England scored 14 tries and looked imperious at times, but they concede so few tries ever that leaking three in a game is worth talking about.  In the entire Six Nations this year, England gave up just four tries over five matches so three over 80 minutes was a surprise. So where did Fiji target? The first try simply came from a brilliant counterattack – it really is best not to kick to Fiji – but the second exploited England’s rush midfield defence, which was too narrow coming out of its line. Surely other coaches will have watched too the way in which in broken play, England occasionally looked disjointed. So yes -  there were some weakness but England were way too good overall and reminded everyone of how hard it is to defend their dominant lineout and stay with them over 80 minutes.

The potential of the women’s game is staggering

Several of the teams who failed to win at the weekend highlighted that with increased support and resources, there is enormous yet-to-be-fulfilled potential in the women’s game.  In scoring three tries against a usually meagre England defence, Fiji reminded everyone that sometimes raw skill and talent is all you need in rugby, and even though they fell away later on it is clear that with more experience they could be brilliant.  South Africa too for almost an hour, made France look quite ordinary before a poor last quarter, with experience again telling, while Australia were magnificent for a half hour against the Black Ferns. Next year’s WXV could not be coming at a better time so these teams can play more regular rugby, and benefit from an increase in support and wider experience.

Italy the team of the weekend

Italy so rarely play teams outside of the Six Nations that it was hard to call their match against the USA, despite the fact that we consider them the most improved side in the world since 2017. Their recent game in Canada was the first time they had ever in fact even played outside of Europe so this was a brilliant result with Beatrice Rigoni and Veronica Madia outstanding as the halfback combination and Silvia Turani also excellent up front. With Canada perhaps not scoring as much against Japan as they privately may have hoped, this makes Pool B a fascinating one. Even if they top the pool, Canada are now the most likely candidates to finish as third seeds – but they will have to beat Italy first and with their tails up, that will not be easy.

Plus ca change for Scotland

Five of the last six games between Wales and Scotland have been decided by seven points or less, and Scotland have been making a habit of losing important games in the final stages. This was no different. Wales, unbelievably lucky to have had 14 players on the field for over an hour (they conceded 18 penalties to Scotland’s five over the course of the match), managed the last play of the match quite beautifully, holding onto possession for over 20 phases before winning a chance for Keira Bevan to kick the winning penalty. Despite surely being frustrated at how the game was refereed at times,  Scotland, really had done enough to win, including winning several penalty shots at goal of their own which were missed and then badly managing the final minutes, with some confusion on the restart allowing Wales to win back possession which they held onto so well. Scotland who could have finished in the top two in this pool, now face daunting clashes with New Zealand and a dangerous and wounded Australian team.