England’s Helena Rowland tells us about preparing for Scotland, staking a claim on the number 10 shirt and building her confidence to call the shots on the field. 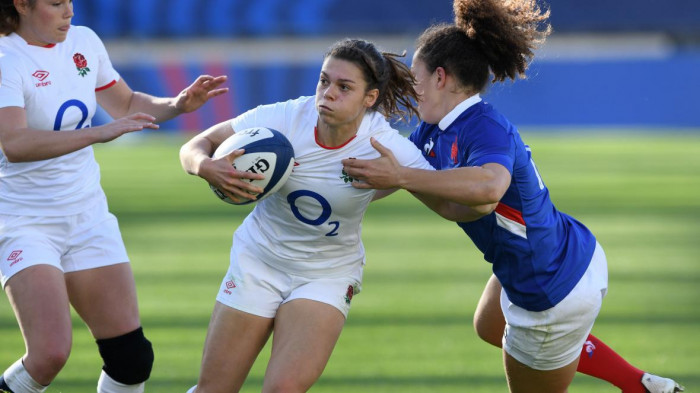 After impressive performances in her debut games for England last Autumn, Helena Rowland is very much the coming player for England in the key fly-half spot.

The postponement of the World Cup and the retirement of Katy Daley-Mclean means that while a battle is playing out between Rowland, Meg Jones and Zoe Harrison for the number 10 shirt, Rowland’s recent performances in it, plus her starting selection this weekend, has given her something of a head start.

Though still better known for her 7s performances for England, Rowland’s performances against France in particular, including a dazzling match-winning try at the Stade des Alpes in November, mean that the Loughborough student is on track to bookend the next 18 months with appearances at the 6 Nations and the World Cup with the Olympics sandwiched in between.

For her part, she’s embracing the chances she’s been given, while reflecting too on the breakneck pace at her progress.

“That focus on the number 10 shirt out there is something I have thought about. It is wide open at the moment really as to who is going to take it long term and I am seeing this weekend as an opportunity to make a claim on it, within that overall team focus of getting the job done.”

“The last few months for me have been a whirlwind and getting a chance to play 10 for England has happened much more quickly than I expected. Prior to my 7s involvement I had only had one season in the league, so it is very strange on the back of a few games for my club and England to be mentioned in the same space as a player like Katy (Daley-Mclean) who dominated the shirt for a long time.”

Rowland describes herself as a ‘running 10’ and she concedes that she is still building her confidence at becoming a key decision maker in the England team.

“I love the ball in band and through the Premier 15s I have had a chance to play in the backfield a bit in defence and I love the counterattack side of that and trying to take people on.

“In terms of calling those plays, I do find it a harder aspect of the game coming into the team but that’s about building experience too. In training I try and make it more of a discussion, but you can’t always do that in games, and you have to make a decision and understand that people will back you.

"To start off with I was worried that I wouldn’t be making the right call but I am a few games in and I’ve had a lot more time with the team so you realise that people will back whatever you’re calling and run it 100% so I feel I am improving there.”

“In the camps we had together I was trying to learn from her as much as possible. Her game understanding and her management of play was outstanding. She was constantly able to put England on the front foot whether that was through her passing game or pinning teams back with her kicking game. The game progressed massively through Katy playing at 10.

“Now there’s Meg and Zoe too in the squad, who are both playing really well in the league so it’s good to pick their brains and talk about how we want to play.”

Rowland’s attacking talents have been on show throughout this year’s Allianz Premier 15s, but Rowland says building on her kicking game is also vital.

“The kicking game at this level is hugely important and increasingly so given how the game is going. The chance to pin teams back and put pressure back on them is massive. You saw that over the Autumn particularly in the games against France – the kicking game defensively was key in terms of us trying to get a result and then the way teams are defending and getting off the line there’s space to regain kicks too.

“Mark Mapletoft has been into our camps and helping us to focus on our kicking game. He’ll pick up conversations with you about consistency and what you can focus on to improve consistency so that’s been really beneficial for me.”

Looking ahead to Scotland this weekend, and she’s expecting a tough battle up front.

“We are expecting them to be physical. They like to get the forwards around the corner, so we need to front up from that point of view. They bring line speed too so managing those first 20 minutes will be important on that front and just getting into the game.”