Spring is a time for new beginnings, which for Gemma Rowland has taken on a meaning all of its own over the past few weeks, writes Chris Wearmouth. 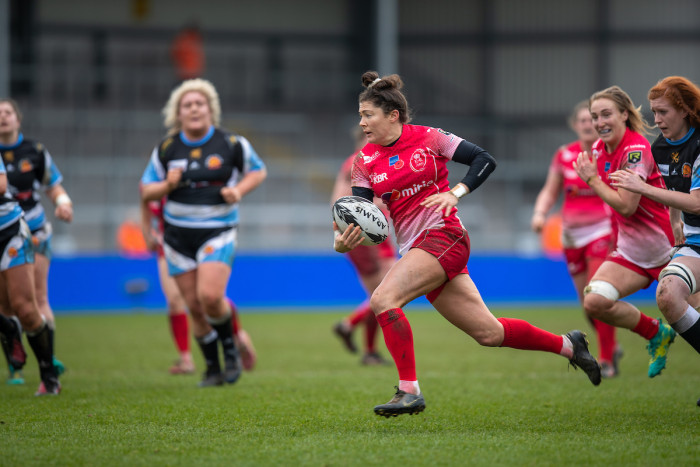 Not only did the British Army Senior Women centre receive another call-up into the Wales Women’s Six Nations squad but she also confirmed a domestic change of clubs, too, switching from Wasps to the newly-established Bristol Bears set-up.

Combined with a dramatic reduction in travel and more ability to dedicate to family and personal time, and all of a sudden you have a 32-year-old who is admitting to a new lease of life when it comes to her sport.

“It all happened at once!” she says. “I’d already been training with the extended Wales squad just before Christmas. There are a lot of Welsh girls playing in the Premier 15s and the new coach wanted to have a look at. Then I got announced in the Six Nations training squad and moving to Bristol in the same week.

“My family are all based in Bristol, and with working from home my life was pretty much based in and around Bristol, Cardiff and Newport, other than driving to Wasps. And with everything else that’s been going on with the pandemic, and with work being really busy as well, I’d be getting into my car at 2pm for training which started at 7pm. Every time I’d get in the car I’d be exhausted, and that was before training for two hours and then driving back.

“So I spoke to Giselle [Mather, Wasps coach], who I’ve known since I was 18 years old, because I knew I wasn’t giving my best performances in training for Wasps. That weighs on your mind, and when you’re also chasing the dream of playing international rugby – and I’m not the youngest any more! – you need to do everything to put yourself in the best position on the field.”

Rowland has been balancing career, family and rugby ever since her first call-up into a Wales squad in 2015. Seventeen caps later, and appearances in the 2017 Rugby World Cup and 2018 Commonwealth Games under her belt, comes the new challenge of helping Bristol Bears establish their Women’s team within the Premier 15s.

“It is exciting and where my fulfilment in rugby comes in,” she says. “Obviously I still want to play in a World Cup and finish my international career on a high, but now it’s also coming back to what I can give to the sport. Rugby’s given me so much, in personal growth, development, opportunities, and the people you meet along the way, and now I want to give something back to the next generation.

“That’s very much what Bristol is trying to establish. Pat Lam came to see us and talk about what the vision is for Bristol Bears Women moving forwards. Culture was a huge part of it and Bristol does have that very good culture. Wasps and Bristol are aligned in their values and there’s a family feel to both clubs. So it’s nice in a way that I’ve made a transition to a new club but in a way it’s also familiar.

“There’s now the drive to grow the playing standards within that culture. Bristol has been unfortunate with a large number of injuries this season, with eight or nine players out of the starting line-up, which makes a huge difference to any team. But that’s also opened the door to younger girls to have the opportunity of being in a match day 23 in the Premier 15s. Moving into next season you then have a larger squad of players with experience at the elite level, and provided that Bristol retains all those players then this could be a springboard into the future.”

With the Bears’ men leading the way in the Premiership and with a European trophy in the cabinet inside the last 12 months, the club is one of the most exciting places to be in the country right now, and this is also inspiring the women to set their sights on the future.

“The whole Bristol Sport franchise is an amazing thing to be a part of,” Rowland says. “It’s amazed me to come into Bristol Bears to see how well its resourced. That’s not always the case in the women’s game. But at Bears it’s different, and even just having Pat Lam come to speak is huge, because it shows that they value the investment. They want the men and women to be Premiership champions, and it makes you feel valued as a squad and included, and adds to your motivation to be better as an athlete.”

This renewed vigour has also extended to the Wales squad, under the leadership of new head coach Warren Abrahams ahead of the truncated Six Nations.

“As athletes we’ve been training constantly and the minute you then have a fixture you get your motivation and inspiration to train harder. Now in the Wales squad we’ve got something to aim for and I think that they’ve planned these games is great.

“There is the flip side that the men are having a full Six Nations and we’re not, but the fact they are doing something for women’s rugby and that they’ve moved it as a separate entity with its own spotlight will be a good thing, as long as the media use this as an opportunity to promote women’s rugby and women’s sport.

“Warren is a great coach as well, very player centred. The sessions challenge you, and even at the age of 32 I leave every session having learned something. It might be a one percenter or a micro-skill, but he picks up on things where I can be more effective, and to have a coach who’s that in tune with his players is incredible. It makes you excited to be in that environment.”

That Rowland has been able to dedicate so much time to her rugby is down to the long-standing support of the British Army, and the Royal Artillery in particular, who also have flanker Bethan Dainton within the 2021 Wales squad, too.

Rowland went straight in at the deep end with the Army, going straight from university to Sandhurst and then into pre-deployment training for a tour of Afghanistan aged just 22. The life experiences have continued to influence her ever since, as well as the lesson to trust her instincts and training on the rugby field, and she also pays tribute to those in her chain of command.

“The support that I’ve had throughout my career to pursue those goals, to get to a World Cup, to get to a Commonwealth Games, and now to go through the process again, has been brilliant. For example, as soon as the news came out that the World Cup was going to be postponed, I woke up to a message from my boss asking me how I was and saying that he hoped I was still chasing the dream for the next 12 months. I replied saying ‘only if my boss will let me!’ and he replied to say that he was behind me 100 percent of the way.

“That is a weight lifted off your shoulders when your chain of command understands your time constraints outside of the office. We have a very open communication policy and my chain of command has always had a flexible approach, provided my work gets done to a high standard.

“They tell me that I’m an officer and if they can trust me to lead soldiers in Afghanistan then then can trust me with my time management. That relieves the mental and emotional strain, and knowing that I can speak openly and honestly if I’m exhausted, such as when I was getting home late in the Six Nations.

“If that’s not an example of an employer being absolutely amazing in supporting one of their employees achieving their goals then I don’t know what is.”

To find out more about how you can combine your rugby with a career within the British Army head to www.armyrugbyunion.org.uk

Image thanks to Neil Kennedy