Rugby and Remembrance special for Cokayne

Rachel Steinberg spoke to England hooker Amy Cokayne ahead of this weekend's test against Canada. 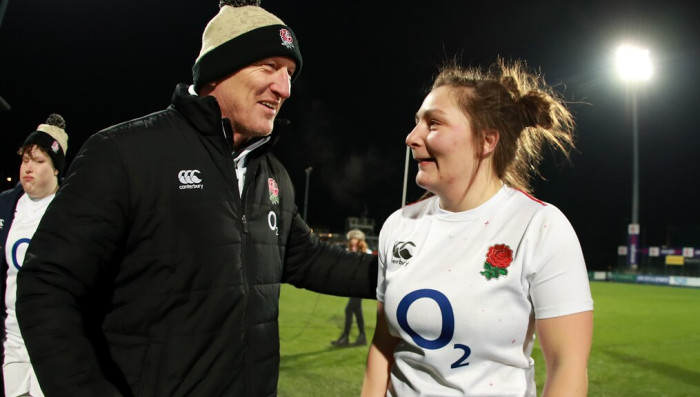 If there is an England shirt that best embodies Amy Cokayne it’s the one she’ll sport on Sunday.

The Harlequins hooker, who earned Player of the Match honours with a hat-trick against the Black Ferns last weekend, also serves as a provost officer in the RAF.

Cokayne—like the rest of her squad—will wear two flowers when her world no.1 side strolls out to face third-ranked Canada at the Stoop. The first, of course, is the iconic red rose. The other is a poppy.

“When people think of the poppy they obviously think about the World War,” said the 25-year-old, who has 59 caps for her country.

“But I think it’s grown from then. And all the stuff that the military have gone through since then, and how it affects people’s daily lives even now, it still has huge effects on people’s lives.

“So I think [Remembrance Day] is a really nice time to be able to step back, reflect on what it is and for people who aren’t necessarily in the military to still have that recognition of a thank you to everyone that has served or is serving.

“To be able to recognise that on a world stage with England Rugby is really important, and I feel a responsibility as a serving member of the armed forces to really push that.”

The last two weekends saw the Red Roses dominate back-to-back contests against a Black Ferns side who hadn’t seen international action in over two years.

Next up are the third-ranked Canadians, who England last beat 19-17 in the 2019 Women's Rugby Super Series.

Cokayne didn’t start October’s first New Zealand Test but got the nod from head coach Simon Middleton for the second and made an instant impact, dotting over on eight minutes en route to extending the Red Roses’ unbeaten run to 16.

The result could have been the opposite—Cokayne nearly became a Black Fern herself after her RAF engineering officer father Ian accepted a job in New Zealand when she was a child. But the Ipswich-born Cokayne, whose full initials spell out AVFC (for Aston Villa Football Club), remained firmly rooted to the UK, and moved back to Britain to start her Red Roses career.

Science-loving Cokayne grew up dreaming of being a vet, dentist or doctor and never considered a career in the armed forces. Still, it was difficult to resist the chance to get paid to play rugby as a student, so, at the encouragement of some Litchfield teammates, she joined the Reserves with a friend.

“We actually ended up really enjoying it,” she said. “We just enjoyed the whole feel of the military life, and we both decided to join up full time as officers in the Air Force once we finished uni.”

Cokayne took time out of rugby to train and is now part of the RAF’s Elite Athlete Scheme, which allows her to commit fully to England and play for the Air Force squad. Bath’s Josh McNally, who earned his first cap for England this summer, is also part of the programme.

The setup allows Cokayne to “dip her toe” into policing duties when she can, and she’s looking forward to the challenge of overseas duties when she wraps up full-time rugby.

“I’ll probably relish that,” she said.

“It will be completely different to what my life’s been like now, and what life’s normally like. I think I’ll be owing a few people some tours away, but I’m excited for that. I think that’s just part of the reason I joined up.”

Recently, Cokayne took to Twitter to call out critics who have accused her of “just using the RAF to let [her] play rugby.”

It is, she insisted, the other way round.

“I very much will definitely have a career in the Air Force after I stop playing rugby,” Cokayne added.

“The Air Force has actually helped me with my rugby.

“Going through that training over that time away really helped me, in terms of I missed the game, which I think I was losing a bit after the World Cup. If anything, it’s prolonged my rugby career.”