Russia beat Germany in Bonn on Saturday, a win that not only gives them a best-ever third place in the European XVs Championship, but will also leapfrog above their opponents into the world top 20. 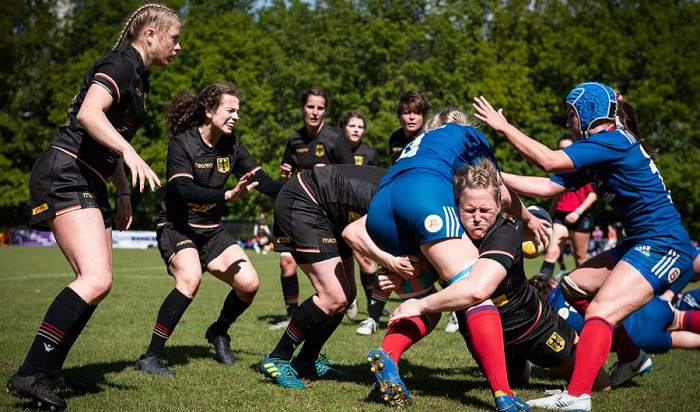 The game took place in a wet and unseasonably cold Bonn. Germany opened the game promisingly, but once turned over Russia forced Germany onto the defensive, keeping possession, moving forward phase by phase. A penalty put them on the German line, and a pick and go the first try after just 9 minutes. 5-0 to Russia.

Russia dominated most of the rest of the half, but some excellent German defence ensured that the failed to turn that possession into points, and halftime came with the score still only 5-0.

The second half continued in the same way, wave after wave of Russian attacks being beaten off until after 64 minutes a break by saw DIana Loginova tackled just short of the line, but the ball was quickly recycled and Russia had doubled their lead to 10-0.

Russia remained in charge and after 74 minutes a 5m scrum saw them drive over for a third try. With the conversion the score was 17-0, extended to 20-0 with a penalty six minutes later.

There was still time, however, for one more try. From the restart Laura Schwinn broke through the Russian line and inside their 22, setting up the base from which Amelie Harris was able to score a consolation try for the hosts.

There is no relegation from the Championship this year, but the result is likely to mean that Russia should be able to avoid Spain in next year’s semi-finals.

"In the end, the Russians today were the cleverer and stronger team and deserved to win in the end," German coach Dirk Frase admitted after the match. "It was the expected physical game, but we took the fight and defended very well against it. Unfortunately, we lost the thread in some hectic phases. When we tried to take the offensive there was not enough support and we could not make the most of our chances. The girls have given everything. And we are convinced that after reforming the team [two years ago] we are still on the right track. We're happy to be able to prove ourselves at this level again next year."