Russian disappointment at missing out on Rio was, to some extent, eased by lifting the European Grand Prix title in Malemort this weekend. 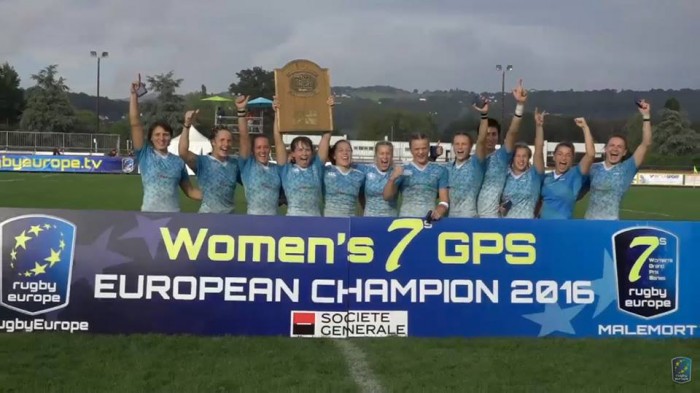 Officially the two British teams again played as “Great Britain Lions” and “Great Britain Royals”. However, unlike the first leg, the Lions and Royals were entirely national selections from the RFU and WRU respectively, and so we describe them as “England” and “Wales” thrroughout in this report.

After losing to France in the final of the first leg Russia not only had to win the second leg, but also improve their overall points difference as France began with a 14-point advantage. Despite being faced with, on paper, tricky games against Portugal and Wales, Russia rattled up 148 unanswered points in their pool, putting them firmly in the driving seat for the rest of the tournament. Wales took the pool runner-up spot.

An untried French selection (squads) defied expectations by also winning their pool comfortably, a big 33-0 defeat of an experienced Dutch team particularly standing out. The young Spanish team (five players from their U18 squad) were, perhaps, even more impressive – their 12-7 win against the Dutch being a standout performance. Both they and the Dutch also reached the quarter-finals

The final of the three pools was a far closer affair. The opening two games saw a new-looking England team only see off Belgium by three tries to two, and then Ireland just manage a draw with Italy. The second round showed this as being no fluke as Italians then came within a single conversion of repeating their earlier result against England, and Belgium pushed Ireland all the way. The final two games in Pool C first saw Belgium shock Italy with and exciting 7-5 win, before Ireland swept past England 27-5 to win the pool.

The quarter-finals went largely as expected, France and Russia winning easily. Ireland also saw off the Spanish a little more comfortably than the opening day pools would have suggested, before England took on Wales. Wales looked strong, but errors and inexperience proved costly, especially at half-time when the Welsh chose to kick a penalty on their 10m line to touch rather than attempting to draw level from the final play. England took the game by 14-5.

England faced France in the first semi-final. Two similarly untried teams provided the game of the tournament, France opening up a two-try lead early in the second half, before England fought back to lead into the final play, only for the French to score a dramatic winner. Russia had fewer problems beating Ireland.

Elsewhere there was delight for Finland when they deservedly beat Portugal in the bowl semi-final. While not enough to prevent their relegation, it was arguably one of the best results Finland have achieved at this level. The Dutch also produced the performances that had been expected of them at the start, gaining revenge for their opening day defeat to Spain with a commanding 24-5 win before beating Wales in the plate final 10-0.

England carried their semi-final performance into the third place game to beat Ireland, before the final. A Russian win would give them the overall title, and although France took the lead through teenager Charlotte Torres Duxan after five minutes, after Alena Bogacheva converted her own try to put the Russians in the lead the result never seemed in doubt.