S America: "Good progress being made"

The first women’s rugby forum took place in Asunción in Paraguay last week - the fourth in a series of six regional World Rugby women’s rugby fora. So what are they all about? And what came out of this week's event? 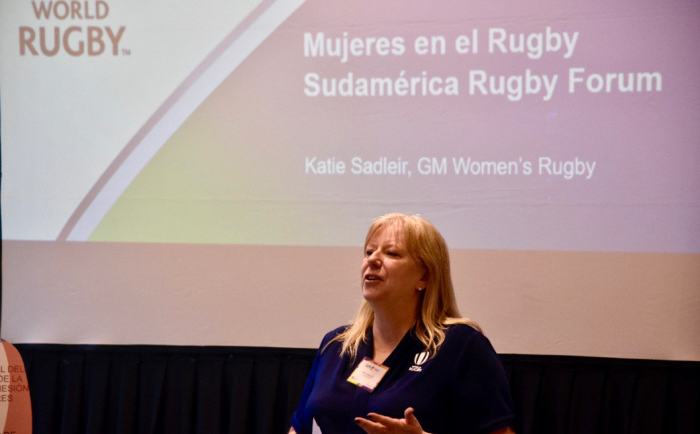 The Women’s Rugby Forum in Asunción this week was obviously an important event. It has been top of the Sudamerica Rugby news feeds for several weeks but, as with the previous conferences, the official statements issued afterwards have been somewhat bland and unexciting (which is why we have not given them much coverage)

So we asked Katie Sadleir, General Manager for women's rugby at World Rugby, what they were the aims of these meetings, and what was coming out of them.

“Following the Leadership forum we ran in Belfast during the WRWC 2017 we made a call to provide a grant to each of the regions to run a bespoke forum to look at challenges and opportunities facing women in rugby from a regional perspective.  Each forum also provides an opportunity (should the region wish) to run some targeted professional development on leadership.

“This is the fourth of six regional forums World Rugby has invested in with the regional associations, the first was in Botswana, second in Madrid and third in Bangkok last year. This year we have South America, Oceania (which is in Fiji in August) and North America (timing and venue to be confirmed).

“The outcomes of all have been different but have met the needs of the region. For example, the African one resulted in a new strategic plan to grow women’s rugby, which is progressing really well.

“The South American Forum finished yesterday and was aligned to the Sevens tournament.

* An overview of the 2017-2025 World Rugby Womens Plan;
* A workshop using the “Balancing the Board” toolkit, focusing on why diversity is important and what we are trying to do to assist regions and unions to adopt good practice; and
* A presentation on marketing women’s rugby, which looked at examples of good practice globally and also talked about getting ready for the global marketing campaign

“The next steps - I gather - will be for the staff of South American Rugby to write up all the notes and actions and work through a plan of action.

“As I say, this was part a programme of global discussion and change not a one off activity in South America. What we are trying to do is encourage the Regional Associations to connect with key stakeholders in their region at a Union level, discuss what is happening globally, understand in more detail what the current state of play is within the region and think through some of the opportunities to take the game to the next level using  the five pillar areas of the global plan as a frame work for discussion

“Whilst here, before the forum, I also visited the programmes in Columbia, Brazil and Argentina.

“I’m heading back to Dublin on Monday after the competition before heading down to Stellenbosch for the first dedicated women in rugby HP Academy which starts on the 6th – pretty cool!”