Samoa became the first nation to confirm a place in the international repechage tournament that will decide the 12th and final place at next year’s World Cup, after comfortably beating Tonga 40-0 in Auckland today (14th November). 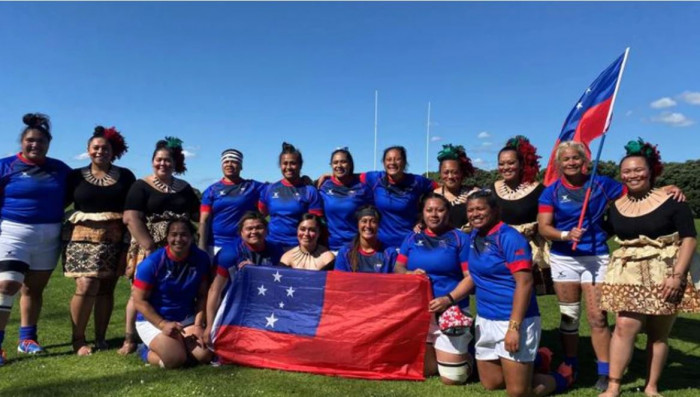 Almost exactly a year after the initial attempt to decide Oceania’s World Cup qualifiers was hit by a measles epidemic, the identity of the region’s second ranked team was confirmed in Auckland today in the middle of a pandemic which – perhaps uniquely in the history of international sport – meant that the two national teams were not allowed to select any players living in the country they represented. All players had to be resident in New Zealand.

In practice the majority of the players likely to have been selected live in New Zealand anyway, and most players missing would have come from Australia rather than the islands, but even so this could be a game that will for the basis of pub quiz questions for years to come.

This was only the third time the teams had met since their first test 14 years ago, and only Tonga’s seventh test. The two previous meetings had been decidedly one-sided wins for more experienced Samoans, but despite their underdog position Tonga matched Samoan physicality from the start.

Tonga showed some promise with an early penalty and leading territory, but it didn't take long for the “Manusina” from Samoa to find some pace and put pressure on attack.

Samoa was awarded a penalty after a bustling run, but took the sensible option to put first points on the board with Makayla Eli kicking perfectly to lead 3-0.

Manusina continued to put pressure on attack shuffling the ball across both sides of the field but found themselves getting rattled by the Tongan's defence.

However Samoa eventually found the perfect attacking opportunity just metres from try line, putting pressure on the scrum, Nina Foase went down the blindside, Tori Iosefo collected the ball and with space on the right scored on debut to take the score to 8-0.

Samoa added the extras with Eli slotting another kick to extend their advantage 11-0.

A turnover for Tonga found them with the ball after a while, but too many errors meant their attacking efforts broke down.

Their scrambling defence was good initially too but faltered when it counted with Marilyn Leve scoring Samoa's second try.

Another good conversion from Eli meant Samoa was up 18-0.

Despite sharing territory, the Tongans just couldn't keep their hands on the ball.

Samoa's front-rowers proved they could get the job done, and with a quick shuffle from captain Masuisui Pauaraisa to the right, Iosefo was just too hard to stop on the corner to collect her second of the day.

The conversion went wide but the Samoan team took a 23-0 advantage to the sheds.

Tonga started losing discipline at the ruck in the second half and after running at the line all day, double international Onjeurlina Leaiataua was able to collect her first for the Manusina, using space and pace to dive over for a try.

Eli impressed with the boot again and extended Samoa's lead to 30-0.

Another couple of scores including to impact bench player Luti Sikoloni, left the final score at 40-0.

Samoa now advance to the final “repechage” qualification tournament to be played some time next year – suggestions are that it could be as late as June or July – and will meet the runners-up from next year’s Asian championship, the runner up from the European qualfiers (which should have taken place next month, but were postponed to next year), and the winner of the Kenya v Colombia playoff.

The winner of that will join the nine teams have already confirmed their places - New Zealand, England, France, USA, Canada, Australia and Wales, South Africa and Fiji – and plus the winners of the European and Asian qualifiers.