Saracens and Harlequins will contest the first ever Tyrrells Premier 15s Final, after both sides came through their two-legged semi-finals against Gloucester-Hartputy and Wasps. 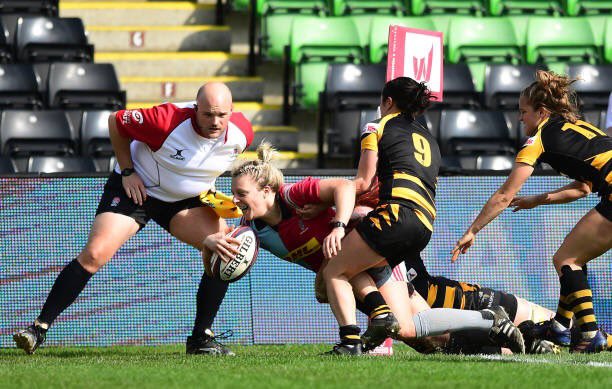 This is the first year of the competition, which will see an investment of £2.4m from the RFU over the next three years with the 10 member clubs benefiting directly from this financial support.

The investment is currently helping sides to establish their strength and conditioning and analysis departments alongside academy systems, with most sides also now paying their leading coaches.

The league has helped to add important professionalism to the domestic game in England and while it has not been without its teething problems - not least the lack of games and playing time for the second 'A' teams of each club - it has been an overall impressive start.

Bryony Cleall went over for the hosts then and Saracens led 19-14 at the break with Helena Rowland and Hannah Botterman counteracting Mary-Ann Gittings’ try on 30 minutes.

The home side got the perfect start to the second half when swift hands from Cleall saw the ball end up with Garnet Mackinder for a try, followed up by a muscular effort from Marlie Packer.

Saracens skipper Lotte Clapp then pounced upon Ellie Kildunne’s clearance kick to make it 38-14, with Kildunne then having a big hand in Sophie Tandy’s try at the other end.

Rowland completed her double and Gloucester-Hartpury fought to the end, with Tandy grabbing the last score of the game that sees Saracens go on to play Harlequins in the final.

Clapp was delighted to reach the final: “We came together again as a team today, we took from what we did last week and built on it through training.

“We didn’t play as flowingly as we did last week but we did what we had to do get to the final and that’s what we’ve been aiming for all season.

“At the end of the day we just need to keep on building from that, we’ve got some real intense training sessions coming up now, we’re really putting into place what we’ve done well and worked to get to the final.

“It’s going to be tough against Harlequins, last time we played them we came away with a loss which is unfortunate, but we know from that first game that we can get points against them.”

At the Stoop the home side also came out on top. The first leg between this two was much tighter and with Wasps needing to win by just seven points or more - this was set to be a much closer game.

Wasps started well but could not find their way through in the opening 20 minutes.And they were made to pay by Harlequins, who opened the scoring in the 25th minute with a slick move that saw Stacey White cross in the corner to score.

With their tails up and a raucous crowd behind them, Harlequins surged forwards again and added a second try - full-back Jess Wooden diving in to score in the corner after another well-worked move.

With a ten-point deficit, Wasps needed a route back into the tie but the hosts took control just six minutes after the interval when Deborah McCormack crossed before Vickii Cornborough added a fourth shortly after.

Danielle Waterman responded for Wasps but that was as good as it got for the away side, as Harlequins held on to book their spot in the final, winning 22-7.

"We came out today with the goal of getting in to the final, repeating what we did last year as well," said Cornborough.

“We knew we had an absolutely massive challenge on us today, the scoreline last week against Wasps was level-pegging and it could have gone either way today.

“All we could ask for from Harlequins was to go back to basics, do the basics well and simple wins games – that’s what we did today.

In addition to the inaugural Tyrrells Premier 15s final, the National Girls U15 and U18 Cup finals will also be played earlier on the same day as the final at Ealing Trailfinders on Sunday 29th April,  with kick off scheduled for 11am and 12:45pm.

Kids will have the opportunity to attend the final for free and watch the top two teams in women’s domestic rugby as they battle it out for the inaugural Tyrrells Premier 15s title, with adults tickets also available for £10 via englandrugby.com/tickets.