Saracens have taken over top spot of the English Women's Premiership after their home win at the weekend with Richmond held to a draw against Lichfield. 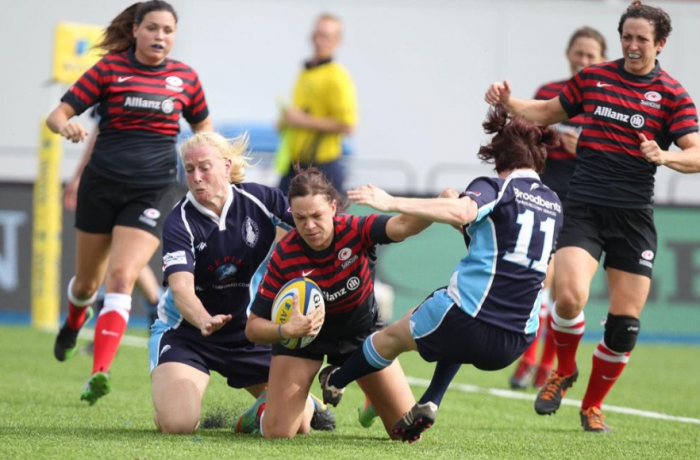 Both teams started brightly, looking to get an early foothold on the game. A  couple of  Saracens penalties allowed DMP to build pressure and their young  backrow of Jo Brown & Abbie Scott proved a constant threat.

Saracens pressure began to then pay dividends, forcing a turnover in the midfield which was moved out wide to centre Hannah Casey who smashed through to make the score 5-0, with Lauren Cattell adding the conversion.

Casey added to her tally shortly after with a show and go to dot down in the corner following a classy break from fly half, April Brown.  Cattell cooly slotted the conversion from the touch-line.

An impressive defensive performance, led by DMP second row Tamara Taylor, kept  the game tight as Saracens were reduced to 14 through a sin-binning before half  time.

After the break  DMP fly half, Katy McLean demonstrated her class with some probing kicks and ability to bring players into the game which tested the Saracens defence, giving Sharks much needed territory but the visitors were unable to capitalise.

The Saracens pack however proved too strong as they got good field position and  drove over from a scrum, with newcomer Georgina Gulliver touching down to make  it 19-0.

Next Gulliver then picked blind and put Brown into space  where she danced over the line to take it to 24-0.

Then some quick thinking from Gulliver from a penalty put them on the front front with  flanker, Poppy Cleall punching through the line to see her over the whitewash.  Cattell added the extras, 31-0 and then beat the final defender to score the last try for the hosts and then convert at 38-0.

DMP continued to press hard and  Sharks took advantage of an extra player and centre, Rebecca  Scholes, who was lively throughout, put DMP on the score sheet at the death.

Wasps beat Bristol at Twyford Avenue giving the west London side two from three wins in the league so far.

There were no scores for the majority of the first half – Wasps showed flair in attack and put in some massive hits in defence, whilst Bristol put pace on the ball when it was in their possession and quick organisation when defending.

About 10 minutes from half time though came a flurry of scores. Wasps flanker, Jane Leonard, got over the line putting the home side up 5-0

Bristol’s Claire Molloy then orchestrated a brilliant turnover following a Wasps scrum and the team worked the ball out wide for Sydney Gregson who carried it over the line superbly for her third try of the season.

An interception from England sevens flier Michaela Staniford led to a sprint down the pitch, and a try by the posts and Hannah Edwards converted the try and Wasps went up 12-5.

World Cup winner, Danielle Waterman, responded with a try for Bristol, which again was unconverted and Wasps maintained the lead, 12-10, going into half time.

The second half started well, with Wasps making lots of ground. Australian international, Dalena Dennison, made a notable break up the pitch which led to a Wasps try through the forwards. Many phases were executed and Bianca Dawson eventually crashed over the line to score. The try was converted and put Wasps up 19–10.

The remaining 30 minutes were fast paced and fresh legs from both sides added to the excitement, however, with no more scores from either side, Wasps held their lead to win the game.

The journey to Aylesford saw Worcester collecting their first winning bonus point of the season with a hard earned victory.

The home side conceded several early penalties and on nine minutes Megan Goddard gave Worcester the lead with a well struck kick.

The visitors continued to apply pressure and an excellent kick ahead from Steph Johnston saw Lydia Thompson out sprint the defence to score in the corner.

Worcester's opening onslaught continued for seventeen minutes but despite pinning the home side in their own half, found Ayesford back in the game when Catherine Spencer executed a text book number 8 pick up at the scrum too drive over. The former England captain's score gave the home side confidence and an attractive and even rest of the half saw no further score.

The second half saw Worcester drive home their superiority with tries flowing from Samantha Bree, Sian Williams, Steph Johnston(2) and Lisa Campbell, with Megan Goddard in immaculate form with the boot taking all the extras.

However, Worcester paid a heavy  price for their victory, losing Lydia Thompson, Sam Bree and Lyndsay O'Donnell to injury.

It was a very different Richmond team that took to the field at the Athletic ground with leading players Alice Richardson, Becky Essex, Annabel Sergeant, Jackie Shiels Abi Chamberlain, Fran and Alex Matthews among others all missing through injury.

Lichfield took advantage of a side featuring some unfamiliar combinations and raced into a 15-0 lead.

They  started strongly with a try from centre Vicky Jackson after 6 minutes. Richmond scrum half Amy Turner, making a welcome return after 2 and a half years out, was heard round the ground shouting instructions to the Richmond forwards after some slow play around the breakdown.

Lichfield added their second try on the half-hour mark through fullback Sarah Nicholas before fly half Tash Jones added the 3rd to give Lichfield a 15-0 lead. Richmond hit back right on halftime with a try from hooker Emma Croker to make it 5-15 going into the break.

Richmond fought back strongly and started the second half brighter with a try from flanker Tess Forsberg to make it 10-15. However Lichfield continued to pressure Richmond at the breakdown and force errors. The game remained at 10-15 until 65 minutes when Richmond fly half Jayne Goodliffe scored however she could not convert so the game remained level.

The last 15 minutes saw both sides press frantically for the win however too many errors crept into the game and the score remain tied at 15-15.